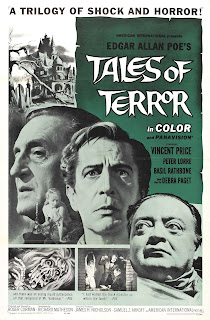 This is a fantastic anthology of horror tales all starring Vincent Price in different roles. He also narrates the bit in between to tie them together. These are all supposed to reference death in some way. Oh and if Price isn’t a big enough draw for you this is also a Roger Corman production so you have two of the best right there.

The first story is about what happens after death. A young lady arrives at a spooky old house by carriage and is dropped off. She knocks on the door and is greeted by her father, played by Price. He is very cold to her, and we find out that he blames her for the death of his wife, her mother. The woman never recovered from giving birth and died when the baby was just months old. The daughter’s name is Lenora, and she wants to reconnect with him. He is having none of it until it slips out that she is dying. This snaps him back to reality and he changes his tune. Realizing he is going to lose her as well he suddenly becomes affectionate and offers to take care of her. So, things are going to turn out well yeah? Nope.

Dear old dad was very attached to mom and kept her body in an upstairs bedroom. This is disturbing to Lenora, but what is worse is that the spirit of mom comes to life and either posses Lenora’s body or steals her life essence. Apparently, she didn’t like her daughter either. Some crazy stuff happens, and the house burns down… basically everyone dies. Sort of a bummer.

This story is very well shot with excellent sets. Price is great in his role with his performance adding to the creepiness. This is yet another example of where he is able to not only rise above what is honestly a melodramatic story and make you believe it is reasonable. His character goes from horrible to loving in such a short time that a lesser actor would have made that seem unlikely or impossible. The ghost stuff is good with the decayed body on the bed and neat use of shadows to show the ethereal creature moving around the old house. This is a good time.

The second story has to do about what happens before death. Peter Lorre co-stars with Price and plays a drunk who is abusive towards his wife and spends all their money on wine. One night when he is out of cash, he stumbles into a wine tasting convention where the attendees laugh at him. Though he takes on the most arrogant and fanciest of them, played by Price. Despite being an uncouth alcoholic Lorre’s character can identify the wine and shocks everyone there with his skill. When next we see them, the pair are returning to the drunk’s house where the fancy man falls for and starts an affair with his wife. The rest of the segment is Lorre’s character finding out and plotting his revenge. This is of course the classic wall them up in the cellar revenge. His big mistake is also walling up his wife’s black cat with them, so when the police come calling his perfect hiding spot for the bodies is quickly discovered and he is caught.

Price takes a back seat to Lorre in this one. Don’t get me wrong as Price is great as the wine snob, but Lorre steals the show. He ability to play the drunk is amazing. I think I’ve seen him do this in other movies before but never to this level. His line delivery is very convincing as someone who is several sheets to the wind, while at the same time still sharp. He holds his own with Price, which is amazing when you think about it. The scenes between the pair are so damn good. We have a couple of legendary actors at the top of their games tossing the dialogue back and forth. Of the three this is my favorite.

The third stars Price again as well as Basil Rathbone. Here we don’t get nearly enough of Price as he is a bedridden man who is on the verge of death. Rathbone plays an unscrupulous doctor that is trying to use the situation to his advantage. He wants to hypnotize the dying man at the moment of his death so that he can research what happens. That brings us to the theme of this story, the Sanctity of Death. Of course, the doctor is also up to shenanigans involving the soon to be widow. When he gets too rough and insistent with her after his death old zombie husband climbs out of bed and defends her. 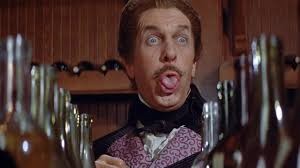 This is very solid and I liked it, but compared to the previous two it is a bit weak. Rathbone is decent but either can’t carry the story on his own or just isn’t given much to do. Price is wasted as he spends all but the finale in bed dying. I think that is why hurts this one the most is the lack of Price. He is the reason that you watch a movie like this and to not have him play much of a part in the story is a bummer. Still, I need to stress that this isn’t terrible, just not as good as the others.

In the end I loved Tales of Terror. If you like Vincent Price and his collaborations with Roger Corman you are going to be a fan of this flick. It is beautifully shot, features some classic actors in addition to Price, and generally scratches that creepy itch that horror fans want when they sit down to a movie like this. I highly recommend Tales of Terror.

Posted by Gutmunchers Lives at 1:06 PM