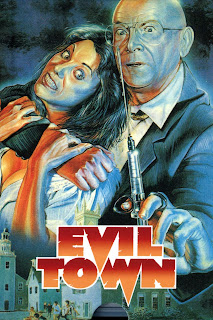 Sometimes I feel like I’m taking one for the team when I watch and review movies. I’m always looking for that odd obscure flick that I might dig and turn other people on to and along the way I suffer thru some real turkeys. While I give them an “A” for effort Evil Town isn’t a very good movie.

The plot, such as it is, revolves around a small out of the way town. This town is evil as they are all in with a local doctor who has managed to slow the aging process thus extending life for the locals. This has resulted in a bunch of older folks drugging and kidnapping young families and passing motorists. Why? Because the good doctor needs their pituitary glands to make his elixir of youth. One of these groups has a young doctor named Chris who is recruited by the bad doctor, Schaeffer, into becoming his assistant and continuing the work.

Side by side with this story is another with some young women who are also kidnapped by some gas station attendants who want to have some fun with them before turning them over to Schaeffer. It seems unrelated to the other plotline, which I will explain later. There is some nudity, inane chatting, and offscreen rape. All the nasty stuff happens in this storyline. Eventually the girls get away as does Chris and his lady friend. Some shit blows up and the credits roll.

Where do I start with this one? First, you may notice there is an Evil Town from seventy-seven and another from eighty-five. These are the same movie. The original flick sat for a few years before an enterprising money man shot some additional footage and blended it with the existing footage to make a “new” movie for the eighties with the requisite nudity and exploitive stuff to play to the “modern” audience. The original flick doesn’t appear to have any. I guess they were trying to cash in on the slasher craze by selling this movie as one of those. Trust me it isn’t. That is why the two plotlines never intersect and the main characters from each don’t bump into one another. 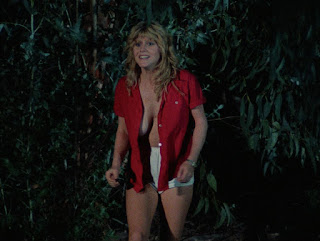 I will give the director and editor some credit. It took me a while before I started catching on that there were two different casts that never shared scenes together. After I noticed that I also began seeing how the scenes were shot differently and it all fell into place. A bit of research after the fact confirmed my suspicions. If I’m going to be honest, I also have to say that the newer stuff was a bit better while the older footage was sort of slow. This could have been much worse but there was clearly an effort made to make it work. It didn’t but I appreciate that.

Pacing is a big issue with Evil Town. People arrive, some get kidnaped right away (the new footage) and others wander around (the old footage) before getting kidnapped. There is some exposition explaining the pituitary gland thing (old footage) and then the rest of the movie is an escape/chase scene (both!). The movie ends rather abruptly as I think they hit the magic number they needed for feature length.

This wasn’t a fun experience. Again, I appreciate how much effort went in and how well they blended the footage. Sadly, as my granddad used to say, you can put lipstick on a pig but it is still a pig. I’d think it is obvious that I’m going to tell you to skip Evil Town.

Posted by Gutmunchers Lives at 1:39 PM