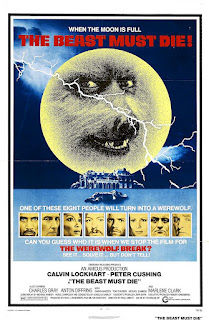 This is an old favorite of mine that I’m shocked I’ve not covered here for the site yet. The movie opens with a wealthy man named Newcliffe throwing a party at his country estate. We have already seen that the place is wired and locked down so that no one can move around or leave without him knowing. Why you may ask? Thru his research he has determined that one of his guests is likely a werewolf and he wishes to hunt it. See Newcliffe is a big hunter and is looking for a challenge. Sort of The Most Dangerous Game meets The Wolfman.

After disabling the cars, he waits for the werewolf to reveal itself and it does. Employees and guests alike are killed by the beast. Thru some discussion it is established that lycanthropy is a disease and that as it progresses the person suffering from it has less and less control until it eventually kills them. There are also some familiar rules about Wolfsbane and silver, which gives them a chance to run tests to prove who is the monster. The rest of the movie is hunting and figuring out who it is.

This isn’t a great movie, but I’ve always enjoyed it. The story is straightforward and gets to the action right away. The bodies start to drop on the first night which leads to some discussion and mystery as quickly everyone is convinced that there is a werewolf among them. There are also attempts during the day on Newcliffe’s life, which lets us know that the person who is the werewolf knows what they are. The Beast Must Die plays out much like a detective/murder mystery as well as a horror flick and that was a nice twist on the genre.

Now I must warn you that this movie is also very cheesy. From them using a large black dog as the transformed creature to the infamous werewolf break where you get a minute to shout out your guesses as to which character is the creature this isn’t trying to be a serious horror movie. At least I don’t think so because if they were then they screwed up. But I have noticed when I show new people the movie, they do get into it and are yelling their guesses at the screen, so it works and is fun. If you want gore, great creature design, and a serious story this is probably not the one for you.

The movie was made by Amicus, which was the “other” British horror studio with Hammer being the more well-known one. Though I’ve always had a passion for Amicus as they put out some great movies that in my opinion rival anything anyone else was doing in the sixties. Because this was an established studio, we get a lot of familiar faces including the great Peter Cushing, Anton Diffring, Michael Gambon, and Charles Gray … Dr. Scott! Though the star of the movie is Calvin Lockhart as Newcliffe. You may not recognize his name, but he was in a ton of stuff. Here he gets to be the star and is excellent.

Like most of the Amicus movies this was hard to find for many years. But you can track down copies easily now and I’d suggest doing so. Again, this isn’t a great or gory werewolf flick, but it is a ton of fun. So go grab a copy, invite some friends over, and have yourself a werewolf break! Trust me it is a blast. I highly recommend The Beast Must Die.

Posted by Gutmunchers Lives at 11:25 PM