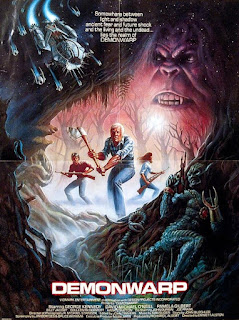 How have I never seen this movie before? Seriously! It has Bigfoot, aliens, zombies, and George Kennedy. What could be better than that? I’ll tell you… nothing! Okay I’m excited here but I’d better do some plot synopsis before continuing.

George Kennedy plays Bill who we see playing trivial pursuit with his adult daughter. Bigfoot breaks in, knocks him out and kills her taking the body with him as he goes. Then we see another group of kids show up at the same cabin armed to the teeth. They think that it is for a weekend of fun, but one of them has set this up as a hunt for a monster trip. They run into Bill who tries to warn them off. It doesn’t work and pretty soon Bigfoot shows up and kills some folks. We also get to see a random hiker and a couple pretty ladies fall afoul of the big hairy murder machine.

It turns out that there is an alien who has a priest leading a cult that worships him. They make zombies out of most folks but can also mutate people into Bigfoot so they can go out and get more victims aka. Zombies. The alien uses the zombies to fix his spaceship while the priest sacrifices some ladies, topless of course, on an altar because the alien enjoys eating their hearts. Okay movie what the hell!

This movie makes zero sense, is completely insane and I loved it. There is always something happening on screen whether it be nudity, gore, or George Kennedy. Demonwarp is just a hell of a lot of fun. Clearly some of the characters are just there to get killed and George Kennedy is hardly in the flick as they only had him for a few days. But none of that matters because they give me everything that I want out of an eighties horror flick. Cool monsters… check. Pretty ladies in various stages of undress… check. Some decent kills also check. I give them extra props for the volume of mullets in this flick. 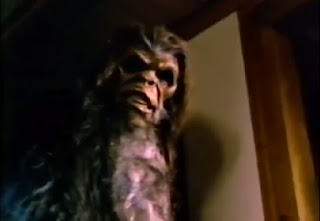 The creature design is on a budget. Bigfoot is a basic dude in a gorilla suit affair, though the mask has some neat animatronics. The zombies are just masks, and you can even see where the skin is poking out from under the green makeup. The alien looks pretty good and there are a couple Bigfoot transformation scenes that are handled well on the cheap. Clearly this isn’t a big budget affair so manage your expectations but for the resources they had the filmmakers do a good job.

I also wanted to point out that in addition to George Kennedy we also see some other familiar faces such as Billy Jayne and Hank Stratton. Both are best known for their television work but Jayne was in Cujo and the Burbs so that is something. The lovely Michelle Bauer also makes an appearance and yes, she is topless for most of the movie. Yeah, I know that makes me sound like a creepy and she is a good actress with charisma but anyone that recognizes her name had that question on their minds.

This is a fun reminder of the sorts of goofy flicks that got made in the eighties for the video market. I never got around to renting/watching this until recently and I’m ashamed of myself. It was always on my radar, but I just never pulled the trigger. I highly recommend that if you haven’t done so yet you also watch Demonwarp.

Posted by Gutmunchers Lives at 6:19 PM