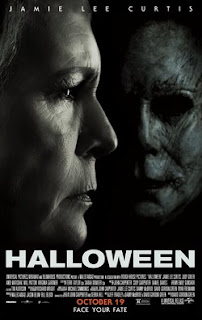 Since the Rob Zombie remakes the Halloween franchise had been dead to me. When this came out, I avoided it but went to see another movie towards the end of its run and decided afterwards to watch it. I can’t remember the last time I saw a real Halloween movie in the theaters. I’m glad that I took the chance to do so.

This movie ignores all the sequels to the original and picks up as if nothing has happened for forty years. Michael Myers has spent all that time locked up in an insane asylum and Laurie has become a paranoid grandma prepper. Though I suppose it isn’t paranoia if you really have a psychotic killer coming for you!

Some podcasters show up to interview the catatonic Michael going as far as showing him the mask from his killings four decades earlier. Nothing gets a reaction out of him. They wanted to see him before he was transferred to a maximum-security facility, which is important because when next we see Michael, he has crashed the bus and made his escape. The same podcasters are at the cemetery checking out Judith’s grave and are see by Michael. He follows them and gets his mask back after some homicidal mayhem.

This action is cut back and forth with Laurie’s strained relationship with her daughter and granddaughter. Though once the bodies start to show up, they quickly realize that she was right, and the family holds up at her house. The house appears to be a fortress with bars on the windows and all sorts of gates, lights, and other tricks. After taking care of a few annoying people Michael goes after the women in the house. He is able to get in rather easily, which seems weird. Until they turn the tables on him, and you realize that it was all a trap. The place is torched with him in it. The end… though there are two more sequels coming so not really. 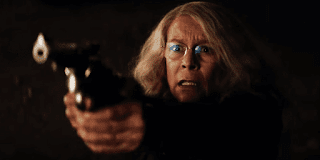 I love this movie. This feels more like the original then any of the other sequels and I’m a big fan of the original Halloween II. The story is solid and feels like a legitimate sequel to the first film. The characters are well developed, and Jamie Lee Curtis is excellent in the role. She plays both the strength of the survivor as well as the vulnerability of a woman who has lost her family over her need to protect and prepare them. There is a scene in a restaurant where she loses her composure that is heartbreaking. Absolutely brilliant bit of acting and writing.

But don’t worry that they missed the point of a slasher flick because the filmmakers also know that we want to see some kills as well as a few scares. There are a respectable fourteen kills in the movie, some are seen after the fact, but many cool gags are right front and center. There are snapped necks, jaws almost ripped off, an iron fence thru a chin, and another with the skin ripped off a skull for an impromptu human jack-o-lantern. Though my favorite kills are tied between a brutal head being smashed on every surface of a dirty lady’s room and a neat gag with a knife coming thru a throat. There is a lot of kills and some good gore here. Oh, and I totally forgot the head getting stomped into a pile of goo! 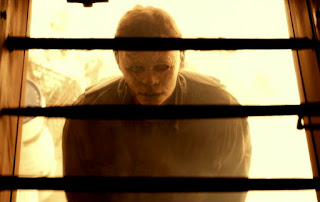 Fans of the franchise should also be happy with the use of the music as it fits with the original perfectly. This includes the musical stingers and stalking music. There are also some familiar masks in a blink and you will miss it cameo on some trick-or-treaters. We even get a fun bit where Laurie gets launched off a second-floor balcony and when Michael checks on the “body” it is missing! I thought that was a cool switch. They even have a precocious kid that instead of running and crying drops one of the best lines of the movie to the boyfriend running up to save his girlfriend. “Don’t go up there! You’re gonna get killed, Dave.”

This was so much better than I expected. Since I saw it in the theaters, I’ve watched it a few more times and it holds up on repeated viewings. I’m excited to check out Halloween Kills, which as of the writing of this review I’ve not seen yet. I highly recommend checking this one out if you haven’t done so yet.

Posted by Gutmunchers Lives at 9:17 PM