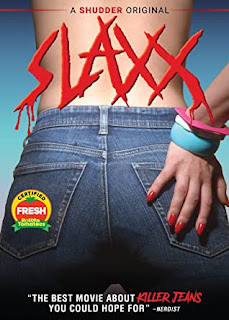 A movie about killer pants… well that is something I’ve never seen before. I know that I’m late to this, but it was on my radar, and I do eventually get around to watching newer stuff. This flick follows our main character, Libby, an eager young lady excited to be starting a new job at an environmentally and socially responsible clothing store. It is run by a charismatic man and feels more like a cult than a store. But maybe that is because I’m old and don’t understand how fashion works.

Getting on with things Libby’s first night on the job is a lock in where they put out the new collection before opening to a large crowd on Monday. This is important as the doors can’t be opened until the system allows them to be. One of the biggest items to hit the shelves are new jeans that automatically shape themselves to your body making you look awesome. But these pants have a terrible side effect, they are pissed off and will kill you in gruesome ways! A bunch of secrets are revealed, and the pants are given a tragic backstory. Yeah, that was a weird sentence to write but this is that kind of movie.

There are going to be some spoilers here in my review so if you don’t like that sort of thing and haven’t watched Slaxx yet let me stop you right here. I enjoyed the hell out of this movie and am going to recommend it and don’t want to ruin it for anyone. Cool? Alright then let’s dig in. The story, characters, and “monster” are all absurd and I loved it. The fact that the movie plays it seriously despite the fact we are watching CGI pants stroll around the screen killing people only adds to the fun. Most of the scenario is played for laughs though it does get a bit serious at times. This is especially so with the origin of the killer trousers. Let me explain.

The supposedly responsible fashion chain has been experimenting with genetically modified cotton plants in India. If that isn’t bad enough, they are also using child labor to harvest the crop. Hell, when one unfortunate thirteen-year-old girl is drug into the machinery they don’t even toss the batch out. That is how the pants are possessed by an angry spirit whose life was cut short. The consumers and employees who support the company that brought about her death are all fair game and get taken out. 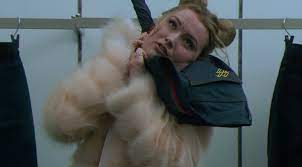 Speaking of that we need to talk kills. There is a lot of CGI not only with bringing the killer pants to the screen but with the deaths as well. Still there were some satisfying gags in Slaxx that I wanted to mention. Hands get chewed off by zippers, an annoying fashion YouTuber has her neck snapped, and yet another person is eaten down to the bone by a swarm of jeans. That was fun. But my favorite kill is also the first. We get an extended bit where an unfortunate employee wearing a purloined pair of pants is squeezed to death. Her waist gets very squishy, and insides come out. I dug it. Toss in some Bollywood song and dance numbers and you have yourself a fun movie.

This is a magical combination of low budget, well written, and creative storytelling that I don’t often get to see. Slaxx is deserving of all the buzz it was getting last year and if you waited to watch it like I did then wait no longer. It is worth your time. Head on over to Shudder (whereas of the writing of this it is currently streaming) and check it out.