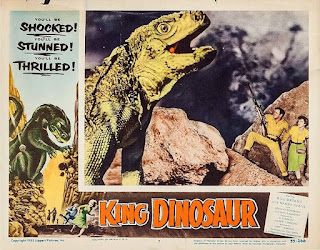 This is another early Bert Gordon movie. In fact, I think this was his first directorial effort. Thanks to a helpful narrator over some stock footage, we find out that a new planet has entered our solar system and taken up orbit near Earth. It is close enough that we can reach it by rocket powered spaceships, which causes a race to see which nation will be first to land on it. Of course, we, the USA, win that race and land some scientists on the planet. There are two men and two lady scientists. Once they prove the planet, named Nova, is hospitable to humans they take off their plastic space helmets and the fun can really begin.

This strange alien planet is populated with strange and wonderous creatures like… um bears, deer, vultures, and a monkey. All brought to the screen with the use of more stock footage! Well except the monkey who is part of the actual honest to God cast. This nature walk, and really for a long stretch it is them walking in the woods reacting to the stock footage, is finally interrupted when they find strange and wonderous giant creatures like alligators, iguanas, and what was either a cricket with its wings ripped off or a termite. Can’t say for sure. Explorers are menaced, shirts are torn, and the “dinosaurs” are nuked out of existence. Two days on the planet and we nuked an entire island full of the locals. Damn…

My first observation is that this movie must have had a miniscule budget. Here we have explorers flying off to another planet and they didn’t spend any time or money to show them on their ship! Seriously we see them climbing down a ladder and that is it. Hell, they clearly only had two space suits as half the crew stayed “on board” to see if it was safe. After that they change into street clothes and go hiking aka. the nature walk. This is such a low budget movie that when the are forced to camp they don’t even have camping gear, just the clothes on their back and a rifle. I know that I’m sounding very nitpicky, but I want you to understand how low budget this movie is. They basically tried to do sci-fi without any money for even a cheesy rubber suit. 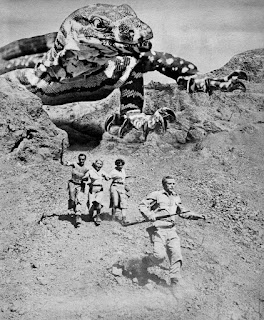 Since I’m on the topic of creatures we must talk about the giant monsters. This is a Bert Gordon flick after all. You can see the early attempts at the giant bugs being brought to the screen with some old school rear projection. Gordon would revisit this in his second movie Beginning of the End with much better results. Most of the monster action are miniature sets with regular sized creatures, in this case a small alligator or maybe a caiman fighting a lizard. By fighting I mean someone was clearly throwing them on each other. There are a couple of times where the gator is doing a death role and twisting the lizard around that made me uncomfortable. I guess it was acceptable in the fifties to do this sort of thing, but it still bothered me. We get a few shots of them interacting with the cast and this is again done with some rear projection tricks.

A lot of what I enjoy about Bert Gordon’s movies are present in King Dinosaur. Giant monsters menacing the cast in goofy ways is the biggest one. But unlike The Cyclops or some of his other movies this is weighed down with a nonexistent script and tiny budget. It pains me to say this, but I would suggest skipping this and watching one of his other flicks. King Dinosaur is just plain boring.