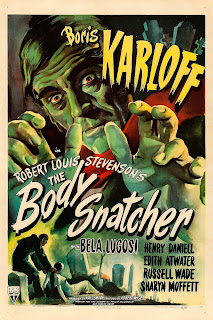 This is one of the Val Lewton produced classic horror movies for RKO Pictures. It stars some familiar horror legends and is based on a short story by Robert Louis Stevenson. Oh, and it was directed by the legendary Robert Wise. I love this movie and was looking forward to watching it for review.

The story is set in a time where medical schools couldn’t get enough bodies to teach their students anatomy. So here the doctor, MacFarlane, is forced to work with an unsavory cabbie played by Boris Karloff. He does some graverobbing on the side and provides the resources necessary for the school to continue. When a little girl is brought in for a consultation MacFarlane uses the excuse that he doesn’t have a body to practice on to deny her a lifesaving but complicated procedure. This bothers his assistant who asks the cabbie for help. Since the graveyards are being guarded, he has to acquire it another way. Yeah, he kills a lady and collects his fee!

The doctors know what happened but are stuck because if the cabbie goes down so do they. That doesn’t stop another worker at the school, played by Bela Lugosi, from trying to blackmail Karloff’s character. I did say there was some talent here, didn’t I? More murder happens with some madness or perhaps supernatural revenge tossed in at the end for fun.

This is a fantastic creepy old horror movie. Karloff is amazing as the cabbie, Gray, being at times menacing and at others tender. He seems to genuinely like the little girl and when he finds out MacFarlane is refusing to help her uses his leverage to change his mind. He also kills somebody so they can practice before trying to help her. Yeah, he might be a bad guy, but he has a soft spot for the little girl. Karloff is such a great actor that this odd dichotomy of character makes sense. He makes you believe that Gray has those sides to his personality.

Another excellent performance is that of Lugosi. His part is much smaller, but he does shine when he goes to blackmail Karloff. The two of them share drinks in front of a fire with the back and forth between is a thing to behold. These guys are well into their careers and were wonderful actors so seeing them bounce dialogue off one another was a pleasure. We also have Henry Daniell, as MacFarlane. He was a working actor that appeared in almost a hundred projects. I know him best for an old Sherlock Holmes movie as well as one of the Charlie Chan flicks. But you all might remember him from The Four Skulls of Jonathon Drake. Again, there was a lot of talent on the screen.

The actors are only helped by an excellent script and direction from Robert Wise. He would go on to make movies like The Day the Earth Stood Still, The Andromeda Strain, and my personal favorite The Haunting. He keeps the action moving while still letting the actors do their job and create characters we can both root for and against. The cinematography is also outstanding and is gorgeous. Honestly there is nothing quite like a gothic black and white horror movie. The lighting creates all these creepy shadows and in the dramatic finale we also get lightning that reveals and then quickly hides some very important action.

I could keep going on but that would feel like I’m beating a dead horse. The Body Snatcher is a must see for anyone that is interested in older horror movies. I know that the Universal flicks are much better known but these Lewton produced RKO flicks are worth a look as well. I highly recommend this one and plan to cover more of them soon.