“They’re coming to get you Barbara…” Is there another line that is quite as iconic to horror fans as that little gem uttered by Johnny in the legendary zombie film that started it all? And with that question I begin my review of not only one of the greatest horror films of all time, but the first of the Romero trilogy that inspired this October’s marathon. Now I’m going to assume that if you are hanging out here at the Horror Dude Blog you have seen this movie, but just in case you haven’t let’s recap the plot. 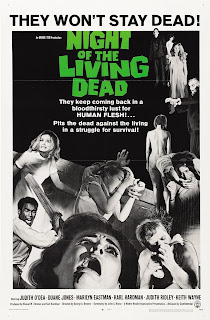 The movie opens with Barbara and Johnny driving to a cemetery to place a wreath on a grave. After a few minutes of dialogue, they are attacked by a strange man who we later find out was a zombie. Johnny gets his head cracked open and Barbara runs away, which will be a common theme. She ends up in a farmhouse where she meets up with a man named Ben who has fled from a massacre in a borrowed truck. Later after they take care of some of the zombies trying to get into the house, they discover that there were more people hiding in the basement, including a real creep named Harry Cooper. After much conflict between the group and an unfortunate gas pump incident the zombies make it inside the house and all hell breaks loose.

I have to assume that you have seen this movie since it is a classic of the genre and has been in the public domain from the beginning. For this review I watched the DVD released by Lion’s Gate a few years ago. It is loaded with special features and is inexpensive as of the writing of this review. This is what I would recommend getting if you don’t already own a copy of Night of the Living Dead. Now onto the movie itself.

From the beginning you can see the strengths of the movie and what so many others have missed when they try to play in Romero’s sandbox by making their own zombie movie. The characters are well fleshed out and the dialogue is solid. From the beginning Barbara and Johnny seem like real people bickering like a brother and sister are apt to. As sarcastic as he is when Barbara is in danger he immediately comes to the rescue. Why? Because that is what a brother would do. While this seems, obvious this is the sort of attention to detail that the movie builds into the plot and characters. Even when we get to see the breathing “villain” in the person of Harry Cooper he is still treated like a person. He might be a jerk but that is partly because he is scared out of his mind! The dialogue between he and his wife Helen establishes that and humanizes the character. And when his end is near the goes to his daughter’s side. People don’t seem to notice that, but it gives the character some depth.

Beyond establishing great characters, Night of the Living Dead also gives us a couple of plot twists that repeated viewings might have made people not appreciate enough. Show this movie to a new person and see their reaction to the ending. Spoilers following just in case you haven’t seen it yet. When Ben takes a bullet to the head just as we think he made it thru the night it is a real punch in the gut! No one expects that, and this shows the brilliance of the script and direction. I also think that having the little girl turn into a zombie and eat her parents was a nice change to what you would normally see in a horror movie during the sixties. Finally, I always like to point out that in the end our villain and creep, Harry Cooper, turns out to be right. The safest place was the cellar and trying to make a break for it was suicide. Think about that one for a while. 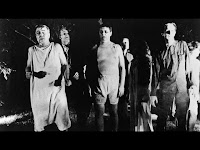 You can’t talk about a zombie movie without mentioning the zombies! Later installments in Romero’s zombie franchise get a lot more talk about the special effects work and gore, but for the budget and for the time it was made Night of the Living Dead does a decent job. The zombies are a bit generic with pasty white complexions. But the movie does push the envelope for the late sixties with some facial appliances, a neat use of a model skull, some bug eating, and yes by God some good old gut munching! I understand that the gore isn’t up to the standards of Dawn and Day, but those are Savini masterpieces. Here they had little money and not a lot of experience. Considering what we get on screen you can’t complain.

It feels a bit silly to say that I recommend Night of the Living Dead. This is the movie that inspired me to search out horror movies and incessantly talk about them. This in turn lead to the last thirty years of me writing reviews and watching anything zombie related. So yeah if you haven’t seen this then you need to.

Posted by Gutmunchers Lives at 11:58 AM