Road Trip to 12 Hours of Terror at the Capitol Theater

October is a big month for me. There are always cool screenings, old movies on cable, special episodes of my favorite television shows, and of course who can forget setting up the house for trick or treaters! Halloween is by far my favorite holiday and nothing puts me in the spooky frame of mind quite like 12 Hours of Terror. This is a great night of horror movies in a cool old theater with like-minded fans. Good times are always had, and this year was no different… in spite of the crappy weather in Northeast Ohio!

This time around my friend Sean volunteered to be my wingman for the evening, so we left town with what I thought was early enough to find easy parking. The Capitol is located in a very cool neighborhood that is filled with bars, restaurants, and shops so it gets busy. I know for sure now that getting there ninety minutes early isn’t good enough, but eventually after driving around the block a half dozen times we did eventually happen upon someone leaving and got street parking just a couple of blocks away. During our search I drove past the same couple of utility company trucks, which is going to be important later in my story.

Car parked Sean and I made our way to the theater to buy tickets and find our seats for the night. When we arrived, the Capitol had signs up letting everyone know that they couldn’t take credit or debit cards. Their internet was down… this was the second red flag that I didn’t catch. Luckily between Sean and I we had money for tickets and the always necessary snacks. You can’t watch movies without popcorn, hot dogs, nachos, hot pretzels, and candy. Maybe you actually can but I’m fat so damnit I was getting my grub on!

Money crisis averted we found nice seats, chatted up with our neighbors for the evening, and chilled out until the first movie of the evening started. This year 12 Hours started off with a Don Coscarelli double feature, the first being Phantasm. I’m not going to sit here and review all the movies because this is more about the night and how much fun the event is. Do I really have to tell you that this movie is awesome? I say quite often here at the blog that the word classic gets tossed around far too often, but this movie rightly has that adjective attached to it. It was a wonderful way to start the night off.

Movie two was Bubba Ho Tep, another Coscarelli flick starring everyone’s favorite Deadite battler Bruce Campbell as an elderly Elvis Presley throwing down with a soul sucking Egyptian Mummy. This is another movie that I love and was having a good time watching… until the lights went out! Remember the trucks I mentioned earlier and the fact that the Capitol couldn’t take credit cards? The weather in Northeast Ohio can suck, though normally not this early in the Fall. Nasty cold rain and high winds took the power out and left us all in the dark. After waiting a good hour for things to come back they called the night and rescheduled it for the following week. 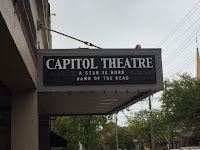 In addition to rescheduling the event the Capitol gave everyone free passes to another movie. That was cool of them and honestly not necessary. But the theater is always looking to take care of their customers and gives a damn about the community, so it wasn’t surprising. When I realized that the theater was showing the new 3D Dawn of the Dead this weekend, I convinced Sean to come up earlier than we expected to check it out. We had passes so it was like getting to see if for free. Honestly it wasn’t hard to convince him… I just asked, and he jumped at the chance. This time we headed up two hours early and found parking right next to the theater! Maybe I’ve got the formula down? With time to kill we found a neat bar across the street to get some pizza and drinks. I also stopped at a record store and found the Blacula soundtrack for a good price. I was already having a great evening!

Back to the theater and tickets in hand for Dawn of the Dead 3D we sat down to see the Romero classic. If you are frequent readers of the Horror Dude Blog, you probably already know that this is my favorite movie. I’m not a fan of 3D and really don’t like the idea of producer Richard Rubinstein messing with Romero’s movie, but I’ve never seen this in the theater. I’m willing to take what I can get. Honestly it was okay but a bit gimmicky with items inserted into the foreground of shots to give them depth. The movie is also dark to make the 3D work and that screws up the color pallet, but at least it made it back into the movie theater after far too many years. 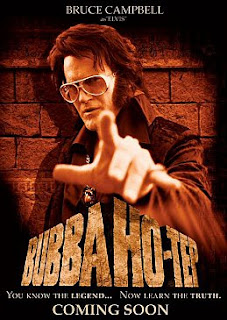 After the people who were just there for Dawn left and the 12 Hours of Terror crowd filtered back in the lights dimmed and Bubba Ho Tep started again. The good news is that this time our luck held, and we were able to get to thru the entire movie this time. If you haven’t seen the Bubba Ho Tep it is worth tracking down a copy. I had forgotten how funny and bittersweet that it was. Both Campbell and Ossie Davis give great performances. It was also cool how they had a bunch of Mummy related trailers and shorts playing before the movie.

They did a similar thing before Event Horizon when they hit us with a bunch of space themed horror trailers. It was nice to have something to watch if you weren’t interested in going back to the snack bar or needed to use the bathroom. I hadn’t seen Event Horizon in years and remembered not really loving it. But it was better than I remember it being and the bit with the guy going out the airlock still made me squirm. Not as good as Alien it still creepy and fun. I think seeing it with an audience also made a huge difference and I can see myself revisiting it once I track down a copy for my collection.

Next up was the mystery screening. Before this one they were playing trailers for Don’t Go in the Woods and Just Before Dawn. Mixed in were some Hee Haw clips… What the hell were they going to show? There was a lot of speculation about various killer hillbilly movies as well as those who thought they were just trying to fool us. I will say that no one guessed what finally popped up on screen, though I recognized it right away. H.G. Lewis’ Two Thousand Maniacs! This was an interesting choice and probably not the greatest one. I enjoy the movie and most of Lewis’ other work, but to make this the third movie and have it play so late sucked the energy right out of the room. The movie is slow and can be an acquired taste.

We had planned on sticking around for the Hills Have Eyes, but after Two Thousand Maniacs it was time to leave. So off to the car and back home we went. Along the way we did make a brief detour at Steak and Shake for a late supper. Yeah I'm talking about food again... get over it. In spite of the week delay because of the crappy weather and the odd choice for the secret screening 12 Hours of Terror was still my highlight of October. If you are anywhere near Cleveland put this event on your calendar. Hell, keep track of what they are doing all year long because they have awesome events happening almost every month. If you do head up to one of the many events at the Capitol let me know what you think.