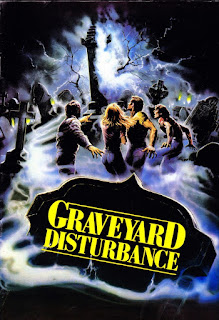 edit: Instead of a trailer, which was impossible to find since this was made for Italian T.V. I linked the entire movie above. It was available on YouTube so I figured why not. Italian cinema, especially the horror/sci-fi exploitation stuff, can be an acquired taste. Sometimes the narrative seems weird, or the dubbing bugs the audience but if you can get past that there is a lot of fun to be had. Graveyard Disturbance is a prime example of this and as an added bonus it was directed by Lamberto Bava of Demons fame for Italian Television.

The story starts off with a van full of kids ripping off a grocery store for some food. Basically, they shoplift and take off with the police in pursuit! It is implied that there is a crash but the next time we see them they are still trucking on down the road. That is until the van breaks down and they are forced to sleep in a creepy old abandoned church. Well maybe not that abandoned, as they soon find themselves in an odd bar that was built in the basement of the ruins. The locals are a bit weird, but the drinks are cheap, and they have food, so all is good.

Of course, things aren’t as they seem. Eventually the kids are challenged with the chance to spend the night in the catacombs below the bar. If they can survive the night, they win a big bowl of loot. Now that seems like some sort of setup to me, but these kids are pretty dumb. Before you can say “Hey wait a minute!” they are all running around being chased by all sorts of supernatural critters. Zombies, vampires, miniature werewolves… There is a lot going on. They even end up facing death itself before things are all over! 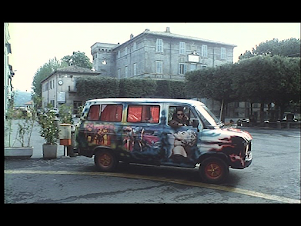 First off, I have to say that the kid’s van has a sweet paint job! Really it kicks much ass! Now onto the serious stuff. Graveyard Disturbance has the feeling of a movie that was written with the motto “Let’s throw stuff at the screen and see what happens”. You get all sorts of goofiness being pitched at the audience. The creatures are plentiful and oddly grouped. My favorite example of this is the family sitting down for supper that is interrupted by the kids. There is no explanation as to who or what they are. And while some of the other creatures they meet are menacing these flee back into their coffins the moment dinner is interrupted. Yeah, they run away from the kids! Other creatures like the eyeball monster in the pit and the vampires seem to want to do them harm. What is the difference between them? We never find out.

Speaking of the monsters I thought that the makeup effects work was really good. The mutant lady with tons of eyes and the creature wearing the Kiss t-shirt were highlights for me. You get a couple obvious dudes in a rubber mask moments, including the big finale, but there is quality here as well. Spoiler alert… There aren’t any kills. The ending is a bit goofy and seems to indicate that the kids beat death and crawled out of the ground. At least I think that is what happened.

This isn’t a movie that you should try to figure out. It is more like a haunted house carnival ride. It is a bit random, but if you turn your brain off it can be fun. Not a classic movie but one that is worth checking out I recommend Graveyard Disturbance.