It is strange that I’ve been at Crappy Movie Reviews for over three years now and I haven’t gotten around to review The Mist. From the first time that I saw it in the theater, which was frigid since the heat was broken, I’ve always liked this movie. The whole siege in a grocery store was a fun gag and that ending… damn. But I don’t want to spoil things so if The Mist is new to you stop reading this review and go check it out. Spoilers will be flowing freely from here on out. You have been warned. 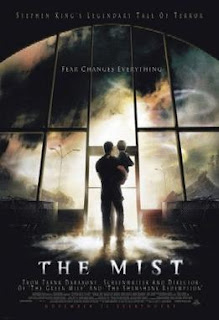 Thomas Jane plays David Drayton, an artist living in Maine. The movie kicks off with a big storm that drops trees and cuts the power. David grabs his son and heads off to town for supplies leaving his wife at home to watch things. Tagging along is his neighbor Brent who isn’t terribly friendly but has a smashed car to deal with. The three head to town and end up at a grocery store. While waiting in line a strange fog or mist rolls into town, the same one his wife had noticed rolling across the lake towards their house before he left. Another local named Dan comes running up bloody screaming that there is something in the mist and they lock the doors.

Are you hooked yet? The rest of the movie is them discovering that yes there are dangerous and strange creatures in the mist that want nothing more than to make a meal out of them. This includes a mysterious tentacle monster, giant bugs, and spiders that spit an acidic web. As if fighting them weren’t enough to deal with in the store people start to crack and suddenly the local loony, Mrs. Carmody, and her rantings about judgement day begin making sense. This leaves us with David, his son, and a small group of survivors having to make the choice of what is more dangerous. The monsters in the mist or the people in the store.

I’m a huge fan of the short story/novella that this movie is based on. Normally Kings work has had issues being transferred to the big screen, so I was initially worried if they were going to be able to capture what made the story so great. Not only did writer/director Frank Darabont do a fantastic job, but the one massive change he makes gives the movie an emotional gut punch that lingers with you long after the movie is over. I’ll talk more about that later in the review. 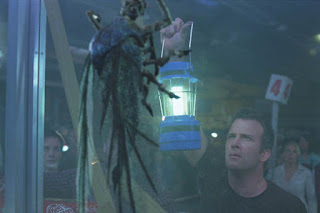 The characters are written and portrayed in a manner which has you rooting for or against them. Jane is excellent as David Drayton with Andrew Braugher holding his own as the angry neighbor Brent Norton. Though just like in the story Norton makes a decision early on that shall we say removes him from the equation. He leads a group of survivors out into the mist sure that nothing is there. Well, you know how that probably ended for them. Toby Jones and William Sadler are also excellent in supporting roles. But really the best performance is from Marcia Gay Harden as Mrs. Carmody. She manages to be as scary if not scarier than the actual monsters! Finally, if you didn’t know Darabont was also responsible for season one of The Walking Dead so we get a lot of familiar faces here including Jeffrey DeMunn, Laurie Holden, and Melissa McBride.

So, we have a good adaptation of a bad ass story filled with characters we can root for. These are all great things and makes it much more suspenseful when they are put in danger. This is what the best horror movies do but that isn’t enough for Darabont. He follows thru with an ending that the story only hints at. Drayton, his son, and three others successfully make it out of the store and start driving south hoping to get out of the mist. They eventually run out of gas and we get a stomach twisting scene with no dialogue where he pulls out a gun and counts the bullets. He only has four. Saying he will figure something out and with the tacit agreement of the group he does the unthinkable. He shoots everyone including his young son. Then steps out of the truck and yells for the creatures to take him. There is a loud grumbling sound, and it looks like his wishes will be answered. Only the sound turns out to be a tank and the army is there collecting survivors and killing the monsters. This all happens seconds after he kills everyone. Holy shit did the movie get dark.

The creatures in the movie are brought to the screen with CGI. Given how otherworldly they are supposed to be I’m okay with that. Plus, the CGI is well done. We get spiders, wasps from hell, tentacles, weird flying lizard creatures that appear to eat the wasps, and finally a giant-sized horror that stomps across their path as they are traveling. Seriously this is a Kaiju sized beast. While the creatures are great there isn’t much in the way of gore. We get some stuff after the fact like the lower half of a guy with some intestines, a few gnarly desiccated bodies from the spiders, and a guy who was used as a hatchery for the spiders. Not bad for a Hollywood flick but I’ve seen much bloodier monster movies.

Between the story, characters, monsters, and that damn ending The Mist gets a huge recommendation from me. This is a great movie and one of the best monster movies that I’ve ever seen. Considering how many I watch that is saying something. If you have read this far, ignored my spoiler warning, and still haven’t watched this one you need to right away. Too many times fans like to assign classic to a newer movie. Here in my opinion, I think it applies. Check it out!