Sometimes I find crappy movies and sometimes they find me. This is one that thru no fault of my own I ended up watching. I could tell right away from the trailer that I was in for something not entirely bad, but probably mind numbingly boring. It just had that vibe and I was right. 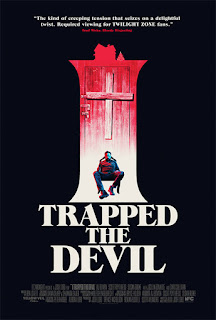 A man and his wife, Matt and Karen, decide to stop in to check on his brother, Steve. It is Christmas… oh crap this is a Christmas movie! Anyway, they decide to check in on him as he lives at their parent’s old house all alone. Steve clearly doesn’t want them there and tries to get rid of them immediately. But they stick around and after some awkward silence he eventually lets them know he has someone locked in the basement. He believes it is the devil and that he is saving the world from all the evil that would result from him wandering the Earth. Also, the phone keeps ringing and Steve believes that someone is coming to set his prisoner free.

Cool setup, right? Not really because nothing happens. As I thought from the trailer it is a struggle to get thru I Trapped the Devil as it is one of the slowest flicks I’ve seen in a while. I have no idea what they were thinking with this movie. They never explain how Steve came to think the person in the basement was the devil. Why Matt and Karen don’t dial 911 right away to have the police show up isn’t adequately sorted out either. Heck Matt goes from “Oh My God my brother is crazy” to “what if he is right” in a matter of a couple of minutes without explanation. There is also a dream sequence that comes out of nowhere and seems to exist for the shock value of what happens during it. They don’t even try and tie the dream into the plot such as maybe the maybe devil in the basement is responsible. 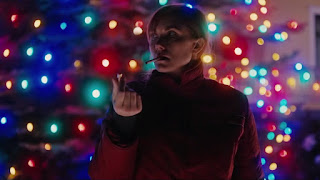 I will say that the movie has a cool soundtrack and is shot beautifully. Though the basement scenes use red lighting that seems to cause some distortion in the digital cameras they were using. That I didn’t like, but the rest of the movie looks great. The visuals are bleak and seem to be setting the scene for some disturbing tale that never develops. I even think that the actors do a good job with the material given them as all three of our leads sell the story very well and seem like real people in a weird situation. Though again without a cohesive story this is all wasted.

I Trapped the Devil can be wrapped up with the phrase ‘All Style no Substance’. The technical stuff and acting deserved a much better story than what we get here and that disappointed me. Clearly, I’m not going to recommend this movie. If you want to watch something with a similar vibe but much better plot check out The House of the Devil.

Posted by Gutmunchers Lives at 1:30 PM