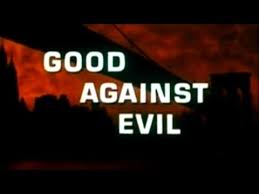 Time to get back to the swinging seventies for another made for television gem. This was an ABC movie of the week that was supposed to lead into a series but wasn’t picked up. That becomes sort of important later on in the review so keep that in mind. The movie was also made during a time where the country was obsessed with all sorts of devil stuff. Remember that the Exorcist and Rosemary’s Baby did big business just a few years earlier. Now let’s get onto the review. The movie kicks off in the fifties with a woman in labor. She keeps screaming about them not getting her baby. Eventually she gives birth and shortly after meets an unfortunate end. Really stairs in devil movies should be avoided at all costs! Her daughter is taken in by a group of people, who we quickly find out are Satanists. The girl, Jessica, has been chosen to be the vessel of the anti-Christ. To that end they make sure that any potential boyfriends don’t stick around long. Basically they kill anyone who likes her, which of course leads to some commitment issues.

With that established we can move forward twenty years to a grown-up Jessica working in San Francisco as a fashion designer. There she meets a man named Andrew and the pair fall in love. This of course can’t be allowed to happen as she is spoken for. Their relationship leads to an attempted murder via horseback riding and some other shenanigans. Eventually the coven kidnaps Jessica and erases her memory. But as long as Andrew loves her, she can’t get it on with the Devil. So, the coven attempts to force him back with an ex-girlfriend. They do this by having the Devil possess her daughter which leads him to meeting a priest, Father Kemschler, who figures out what is happening. The movie ends with Andrew and the priest heading off on a road trip to save Jessica and maybe the world.

To start off with I need to address a pretty big issue with Good Against Evil, the ending or lack of one. If you remember earlier, I mentioned that this was made as a pilot for a series that wasn’t given the green light. To that end they were trying to set up an ongoing storyline so while much of the movie is spent establishing Jessica and her situation it never gets a resolution. Instead we get a subplot of Andrew’s ex-girlfriend and her daughter tacked on at the end for the sole purpose of introducing the Father Kemschler character which would have been necessary in the ongoing series. I completely understand if that annoys viewers but as a veteran of these made for television flicks this sort of thing happens often and doesn’t bug me.

With that out of the way I want to talk about the story and a bit about the cast. The story is very much a product of its time. It feels like a mashup of Rosemary’s Baby and the Exorcist with the limitation of getting it past the censors. While it isn’t as nasty as those movies it still has its moments. The bit with the mother being chased around the hospital in the dark by the nun is creepy. There is also a really effective gag used when Jessica walks to the altar in a church that is simple but works great. Though the highlight of Good Against Evil is the exorcism scene which is killer! Who knew that throw pillows could be tools for the Devil? I’ll admit that the movie is sort of melodramatic and cheesy at times. But as a fan of this sort of movie that is to be expected.

The cast is really good. Andrew is portrayed by Dack Rambo, who was a familiar face to television fans of the seventies and eighties, is excellent in the role. As the lead he has to carry much of the movie and does so successfully. We also get a great performance from Dan O’Herlihy of Halloween III fame as Father Kemschler. He kicks much butt during the exorcism scene. We also get a brief and very early appearance from actress Kim Cattrall. But my favorite character is the lead Devil Worshiper, Mr. Rimmin. Richard Lynch shines in the role that sadly doesn’t get much screen time. I’m sure he would have factored much more into an eventual series.

We almost had a television series about a priest and reporter on a road trip to beat the devil. That would have been awesome and really short of adding a bigfoot into the mix could they have been any more seventies? Sadly, that didn’t happen but at least we still have this movie to let us know what could have been. As of the writing of this review you can watch this on YouTube. I highly recommend that you give it a shot.

note: Since it is available I linked to the movie on YouTube instead of the trailer.

Posted by Gutmunchers Lives at 9:39 AM