I have covered quite a few made for television movies here at the website. I enjoy the heck out of them, always have. Most of what I’ve reviewed have been older movies from the seventies and early eighties, the stuff that grew up watching. I’ve known about Strays for a long time, but it never interested me until I saw that it came out on Blu-Ray and I then found that release on sale. I figured I’d take a shot and see if a killer house cat movie would entertain me. 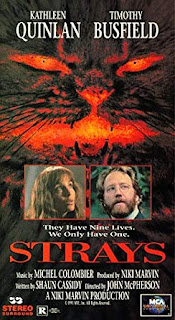 Strays starts off with an older woman feeding the massive group of cats that she has accumulated. She realizes that there isn’t enough food and goes into the basement to get more. The audience gets to see that something follows her down and either kills or causes an accident that kills her. After this tease we meet our main characters of Paul and Lindsey who have decided to move to the country after having a daughter. They are shown the house by Lindsey’s sister Claire, who is also a Realtor and is going thru a nasty divorce.

This last bit becomes important because Paul is her divorce attorney who is oblivious to the fact that Claire is putting the moves on him. This drives a wedge between Lindsey and her sister as well as putting a strain on her relationship with Paul. This added isolation from her closest family is used in the big finale where the large tomcat that killed the old woman decides that the house is his and attacks Lindsey and the kid while they are home alone. The cat even manages to cause a car crash which means they just can’t hop in it and drive away. This is one smart and angry feline.

I really wanted to like this movie. It has all the cheesy hallmarks of something that I’d force my friends and family to suffer thru again and again with me. A silly premise of house cats killing people and marking its territory caught my attention while reading the back of the box. The stuff with the sister-in-law hitting on Paul is a bit sleazy and weird which is a nice addition. There is the comic relief of the vet who comes to take care of the family dog, Bennie, after he meets up with the nasty cats. Fear not the dog is okay in the end! The vet is just one of the quirky supporting characters that pop in and out. There were so many good things here, but I just didn’t like it. Why is that?

It isn’t the cast, which is filled with some familiar faces. Timothy Busfield (Revenge of the Nerds) does a good job as Paul and really tries to sell that a cat strikes that much fear into him. Veteran television actress Kathleen Quinlan is equally as good in the role of Lindsey. Claudia Christian, who most fans will recognize from her time on Babylon 5, nearly steals the movie as the randy sister-in-law Claire. Hell, the movie was written and produced by Shaun Cassidy! There is a lot of talent in front of and behind the camera.

The huge flaw that Strays has is that it has one big tomcat menacing the family. In spite of the plural title the only cat that attempts to do any real damage is that one cat. It isn’t even a special cat. No mutations, not terribly smart, no supernatural powers, hell it isn’t even all that large. It is just a damn cat! Now I know how bad a cat scratch or bite can hurt, so I’m not entirely discounting that, but the characters act like they are in fear of their lives. Maybe if all the cats were actually attacking them I’d be down with it, but a single cat… I’m just not buying it. This movie should have been pissed off cat meets size nine work boot end of story.

I wish that I could recommend Strays to you, I really do. But I just can’t get past their weird decision to make a single cat the source of terror. It never feels dangerous at all and that spoils the fun. They double down with a freeze frame on a kitten as the place is being shown to a new family. Oh NOES a kitten! This one isn’t even worth laughing at and I’m thinking you should skip it and watch the equally silly but much better killer cat movie The Corpse Grinders.