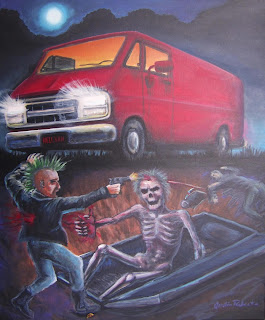 I’ve always prided myself on being transparent about things here at the site so before I begin this review I want to let everyone know that I’m friends with the filmmaker who made Hell Van, Jorge Delarosa. I even had the pleasure of a set visit which I wrote up for Midnight Magazine a couple of years ago. I know that I can still be objective despite this, but I didn’t want anyone to think that I was “shilling” for the movie. I guess that is a spoiler of sorts since I’m clearly going to give Hell Van a positive review.

The story is deceptively simple. We have a firefighter who drives around in his red van burning down churches. Eventually he burns one down that is full of kids. When the locals finally corner him he kills himself right after a “hail Satan”. You guessed it the red panel van is the titular character! The chaos doesn’t end there as everyone who encounters the vehicle ends up dead or worse. The damn thing even drives itself off the salvage lot it was towed to and cruises around town. If you look inside something snaps and you do terrible things. Sometimes to others and sometimes to yourself. I’m trying to keep things vague here as to not spoil the best bits. Eventually the sheriff, played by director Delarosa, corners the thing at the local drive-in for a final confrontation. Though it doesn’t end like I was expecting.

You know I realize that I just wrote that I wasn’t going to spoil things but I don’t think I can properly sing the praises of Hell Van without doing so. With that in mind and if you don’t want the movie spoiled stop reading right now and track yourself down a copy. This is a great movie that I’m going to recommend. As of the writing of this review I don’t think it is available for purchase but that should change soon. Check out their website at https://www.slowmutants.com/ for updates. Now on with the good stuff. 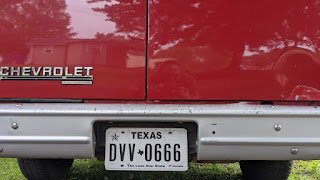 I watch a lot of independent flicks and if you have read many of my reviews you know that one of my biggest complaints is that far too many filmmakers don’t have a fleshed-out story before they go off to make their movie. Hell Van has a very cool story with a beginning, middle, and end. It may seem odd that I’m patting them on the back for such a basic thing, but it’s a huge issue with indie filmmakers. Not only does this have a cohesive narrative but the characters are fleshed out with some history between them. We have a woman cheating on her husband, some drama between father and son, as well as marital issues. None of these slow the main plot of the killer van down, but it adds to the depth of the characters. You feel like these are real people, which makes what happens to them even more disturbing. Solid story with characters you care about is not limited by your budget only by the time you put in ahead of shooting. This is the way it should be done.

I also love how weird the ending gets with what I think is an asteroid or something like it smashing into the drive-in during the big finale. This goes hand in hand with the odd and twisted flashes of scenes that pop up now and then. These inserts set the tone and keep the audience off kilter without overwhelming the story and taking us away from the proceedings. This along with some odd camera angles and the red lighting used when people are in and around the van gives the proceedings a certain The Beyond feeling that as a big Fulci fan I dig. This very much feels like a late seventies early eighties movie. 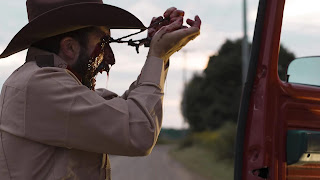 The special effects work is stellar. There are some fun kills like a bullet to the head, a shotgun to the chest, some gut munching (yes, we get zombies!), and a guy gets sick and is mutated with what I think are teeth sprouting from his skin. That last one is very creepy and I got to watch the makeup get applied during my set visit. Toss in some self-mutilation with a creepy gag involving eyes being gouged out and you have a bloody fun time. They also do a couple exploding cars. Not the crappy CGI that I see in most independent movies but actual cars blowing up and burning! Toss in a couple people getting set on fire and you have a movie that is trying to do things in a very “old school” manner that you just don’t see anymore. Hell, we get a couple of actual models used for a burning church and for the tracking shot of the asteroid thing hitting the drive-in. I loved this!

This is a fantastic movie that I absolutely loved. Again, I don’t think that I’m being biased and if I had issues with Hell Van, I would voice them. Before watching the movie I sat down and literally created a list with check boxes that I wanted to see or for some not see. When the end credits rolled I had all the boxes checked and couldn’t have asked for a better way to spend ninety minutes. This is the sort of filmmaking that we as fans should support. I promise that you won’t be disappointed with this one. Again hit their website up at https://www.slowmutants.com/ for more information.

Posted by Gutmunchers Lives at 1:33 PM