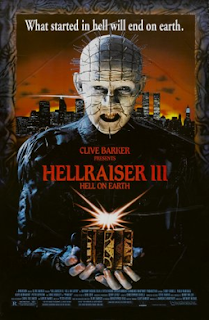 My trip down the Hellraiser wormhole continues with the third entry in the franchise. Hell on Earth is the last one that I watched and even then, it was on Showtime years ago, maybe the late nineties. I hadn’t seen this in a while and was interested in what I was going to get. It stars Terry Farrell (Star Trek DS9) and was directed by Tony Hickox of Waxwork fame, so I had some hope for it. Might as well jump in and see.

Red cowboy boot wearing douchebag J.P. Monroe stops by a gallery in the middle of the night to buy some art for his equally douchey club, The Boiler Room. He sees a very familiar stature, the pillar from the end of part II, and decides that is the item he wants. Then the action switches to Terry Farrell’s character of Joey, an aspiring reporter, who happens to be in the emergency room when they bring in a man wrapped in chains. You can probably guess what happens next. After his gruesome demise she obsesses on solving the mystery. Why was he covered in chains and why did he head explode? You know reporter stuff.

Joey tracks down the woman, Terri, who was with him when they brought him to the hospital. She leads her to J.P. who has made a deal with Pinhead who because of the events of the previous movie has somehow been released into the real world. That means no more rules and a lot more murder! There is also a bit with Joey being scratched by one of the chains in the hospital that connects her with the familiar box and allows the ghost Elliott (Pinhead when he was still human) to contact her. With his guidance she tries to return Pinhead to Hell and save the Earth from his wrath.

This was a way better movie than I expected it to be. The story is tight with the mystery of what is happening being slowly unraveled. This is the first movie where the rules have changed which keeps the audience a little off balance. This would have been annoying if the story hadn’t explained it and in fact made it central to the plot. Pinhead is loose and has no limitations on himself anymore. You no longer need to make a deal with the devil to get messed up! Not only that he has been separated from the human half of his being, so the violence is even more brutal and random. The club scene where he destroys what seems to be a hundred people is crazy and unlike anything up until this point. I dug that.

The cast is solid with Terry Farrell and Doug Bradley carrying the movie. Bradley has a decent amount of screen time as both Pinhead and Elliott, which is cool. The rest of the cast is solid but not terribly memorable. Several of them get to play both human as well as Cenobites as Pinhead goes about rebuilding his crew. We get a smoking cenobite, a bartender/flamethrower cenobite, a D.J. cenobite that throws CDs like ninja stars, and my personal favorite a cameraman cenobite that gets some very funny lines.

The gore is pretty damn good for the nineties. There is all sorts of blood spilled in the club with flesh getting ripped by chains ending in fishhooks. Some of the highlights are an exploding head, some pointy things jammed thru heads, a camera lens punches clean thru another noggin’, and my favorite a woman is skinned alive as her skin to ripped off in one clean jerk. There are also explosions and creepy art coming to life. My inner gore hound was more than satisfied with what I got in Hellraiser III Hell on Earth.

I’ve heard that in most people’s opinions this or part IV are the best sequels in the series and after them things go downhill quickly. We shall see as I plan on making my way thru the rest of the series. Until then all I can say is that this is a fun movie that is worth checking out. For this review I watched the Arrow Blu-ray that was released as a box set with the first three movies. I’m not familiar with what the other releases of this movie look like but it is pretty sharp here. Check it out and I’ll be back with the next in the franchise.

Posted by Gutmunchers Lives at 11:30 AM