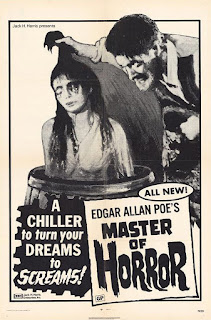 Time to check out an anthology that I’ve never heard of before. Master of Horror was originally released in Argentina in the late fifties. In sixty-five it was recut dropping one of the three segments and dubbed for a U.S. release. The stories were adaptations of Edgar Allen Poe tales with The Case of Mr. Valdemar and The Cask of Amontillado being the pair that made the cut.

First up is The Case of Mr. Valdemar. In this one we are introduced to a doctor who thinks he can use hypnotism to cure insanity. He goes to an insane asylum and does his magic on a woman patient there. It works too well as she wakes up during the night sane and dies of fright when she realizes she is locked up in the nut house. Discouraged he is visited by his friend Valdemar who tries to encourage him. During that discussion his impending death from an incurable disease comes up. The pair decide that Valdemar will by hypnotized right before he dies to see if they can prevent it. That isn’t going to end well.

This isn’t too bad. The story drags a bit, but overall, I was interested. I’ve read the story, so I knew what was coming. Still the adaptation was decent enough to keep my attention. This is a low budget affair with minimal sets/locations. It leans heavily on the cast to sell the scenes to the audience, which they do. That said the payoff at the end when the long dead but still talking Valdemar is snapped out of his trance was decent. He basically melts/decomposes in front of his doctors. Simple effect but sometimes those are the best kind. I rather liked it.

The second story was The Cask of Amontillado. When a salesman rolls into a small town and starts to romance a married woman her husband takes notice. The boastful man talks about his knowledge of wine and since the husband runs a successful vineyard he offers to take the man into his cellar to sample the finest examples from his private stash. It isn’t until they are down there that it becomes clear it is a setup. The husband knew all along that his wife and the salesman were canoodling and is determined to make them pay. Thus comes the infamous “walled up alive in the cellar” bit that even the most casual Poe fan recognizes. 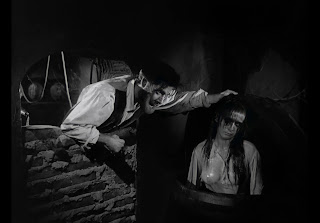 They took some liberties with this story when adapting it to the screen. I get why since the source material is light on backstory and motivation, but I only wish they had done a better job. I can’t say that the story grinds to a halt because it never gets rolling at all. I was never interested in the characters and the illicit frolicking of the lovers feels nothing more than filler before they get to the good stuff. The actors are okay, but I never felt like there was any horror in the man being walled up. Not even when the fate of the wife is revealed to him. Unlike the first story the cast here doesn’t sell it and that made for a tedious watch.

Clocking in at a total of sixty-one minutes Master of Horror isn’t a big commitment. The first story is worth a watch so despite my disappointment with The Cast of Amontillado I’m still going to recommend tracking this one down. It can be a bit of a hassle finding a copy but if like me you are always on the lookout for cinematic oddities, I think it is worth the effort. What I need to do now is find the original cut with all three stories and some English subtitles.

Posted by Gutmunchers Lives at 3:24 PM