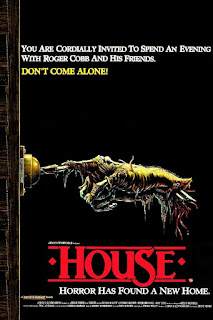 Time to delve deep into another franchise. This time around it is the loosely connected House series of movies. I know you, the uninitiated, probably thing there are only two in the series. Well, there are four so that is enough to make it a franchise in my book. Time to dig into the first and honestly best in the series.

William Katt plays a famous horror author named Roger. As the story opens we see that he is struggling to write his next book amid recently losing his son and getting divorced from his wife. His aunt who raised him kills herself and he moves into her old house. The same house where he saw his son disappear into the swimming pool, though no one believed him. Not long after arriving he starts to see ghosts including that of his aunt. She warns him that the house tricked her and that he needs to get out before it is too late. But he won’t leave. Instead, he works on his book about his experiences in Vietnam. We see these played out as flashbacks. It is here that we meet his army buddy Big Ben. Things don’t end well for Ben and that has a connection to the house and Roger’s son disappearing.

This is a classic from the eighties and one that most of us probably rented more than once on VHS. It has a great group of actors with William Katt, Richard Moll, and George Wendt, who is Roger’s nosey neighbor Harold. Moll and Wendt are both known for their comedic roles and that is put to good use in House. While I wouldn’t consider this a horror comedy it does have a lot of funny lines in it. Having some cast with comedic timing works in favor of the movie and was some inspired casting. The underrated Fred Dekker wrote the story that the screenplay is based on, and Steve Miner directed. That is a lot of horror cred right there, so it isn’t any wonder the movie works so well. 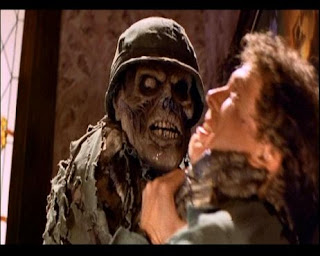 Being an eighties horror movie, we have to talk special effects work. We don’t get any gory kills, but we do have four cool looking creatures. First up is the closet monster that Roger encounters early on after his return to the house. It is a large puppet that pops out and attacks him a couple of times. While it looks like a puppet, I still think that it works well on screen. Then you get Demon Sandy. Roger’s ex-wife stops by to check up on him, but of course it isn’t her but the house messing with him. Quickly we get demon Sandy, which is an actor in a latex body suit and is reminiscent of Henrietta from Evil Dead II. We also get a stop motion skull bat that attacks Roger when he crosses over to look for his son. Cheesy but again I rather liked it. Finally, zombie Big Ben shows up. This makeup gets a lot of screen time, and deservedly so. This is by far my favorite creature.

This is a great movie and a must see if you are a horror fan. It seems that I see a budget DVD with House and House II in the aisles of most big box stores every Halloween, so it is easy to get your hands on. I highly recommend it.

Posted by Gutmunchers Lives at 10:32 AM