I do like monster movies and this one was executive produced by Roger Corman and directed by Jim Wynorski. It also “stars” C. Thomas Howell. There were a lot of reasons for me to be excited about Camel Spiders. Time to see what I’ve gotten myself into. 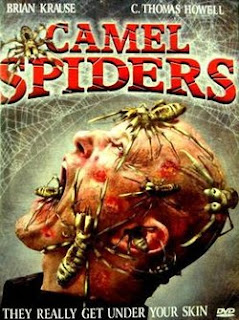 The movie wastes no time getting to the spiders. It opens with the military doing battle with the Taliban when some CGI spiders show up and eat the terrorists. A couple of them hitch a ride back to the states inside the body of one of the casualties Arachnophobia style. There is an accident when a criminal being pursued by Sheriff Ken, Howell’s character, hits the truck transporting the body which hits the road, and the spiders are let loose. Somehow in a matter of an hour the couple of spiders turn into a horde of giant spiders that overrun the local area and start killing everyone. This includes random college students taking a class in the woods, the customers of a local diner, and of course the sheriff and military.

I don’t expect much from my creature features, but I do want them to make some sense within the world that they are taking place in. Sure, this might be a giant spiders killing everyone flick, but logic still needs to apply. That becomes an issue with Camel Spiders early on. We have an accident that lets a couple spiders loose and before the partially disabled truck arrives at town there are suddenly hundreds of the bastards creeping around. Some of them as large as a person! How does that work? I mean at least give me a throwaway line about the local chemical plant or radiation mutating them causing them to rapidly reproduce. That would have been dumb, but at least an attempt to explain this away. Again, your movie needs to make sense in the world that you have created.

The script is also a mess. We have a second group of characters that seem to exist only to function as a cutaway to up the body count. They are in the woods, run to a house, and then get killed when a spider jumps from the engine compartment of their car. At least I think they do since we have two women in the car that are last seen screaming at a spider outside eating one of their boyfriends. We never do see if they live or not. Then there is the overly complicated escape of the main group of characters that has them continually splitting up to be picked off when in the end they just walk out the front door to the truck. And why did they need to carry the perfectly fine teenager girl out in a fireman’s carry? She wasn’t hurt… what the hell movie? 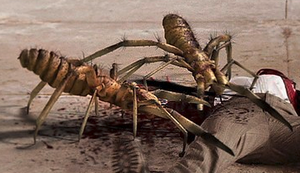 C. Thomas Howell is the best actor in the cast, and he has probably the fewest lines of the leads. And I don’t even know if I’d call him a lead since it is obvious they only had him for a couple of days. Halfway thru the movie he goes up to the roof and is killed by the spiders because… reasons? Then there is the conundrum of them taking the truck they know is broken instead of the dozens of perfectly good cars when they make their escape. Now of course that is so the truck breaks down and they get to make their final stand at the gypsum factory, but it makes zero sense. Again, they knew the truck was damaged and wasn’t going to make it out of town.

There are more examples of sloppy writing, but I don’t feel the need to continue. The positives are the bad CGI spiders, which I expected. That is sort of the modern version of cheesy miniatures or a man in a rubber suit. It looks goofy on screen but that fits the movie. We also get to the spiders right away and the plot makes sure that it keeps throwing stuff at the audience. It might not make a lot of sense, but Camel Spiders is at least full of action. While the kills are lame, we do get a lot of them with eighteen characters dying on screen. Most of them are just the actors rolling around on the ground with a badly rendered CGI spider added in later. Still, that is a decent body count so I give them an “A” for effort.

If I’m going to be honest and I am, Camel Spiders isn’t worth your time. There are much better monster movies in the same vein such as Big Ass Spider or Eight Legged Freaks that have the same goofy charm but boast a much better story. Watch one of those and pass on this one.