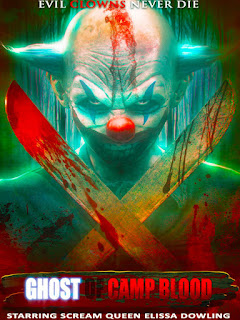 If you have stumbled over this review you might want to check my look at the Camp Blood Franchise by starting at the beginning with Camp Blood. Click here to start things off right.
Well damn. They had managed to make a couple Camp Blood movies in a row that I didn’t hate but then we get Ghost of Camp Blood. The movie kicks off with a woman getting naked in the show and then getting killed in a garage and then getting naked in the shower and getting killed in the garage again. Later in the movie we must go back in time because she is alive, and we get to see the sequence play out again with the killer stabbing her and then pulling her guts out. Who is she and why is she being killed? We never find out, but I think it was just another vision that the ghost of the killer clown keeps dumping on people.

Yep, the killer is truly dead this time around. We meet a television host that is about to get fired and his show cancelled. But he pitches the incredible idea of doing a show on the Camp Blood killer. To do this he gets the mask, which I think is haunted. The ghost starts to give everyone bad dreams, including some college aged ghost hunters that want to help him out. Those bad dreams and visions mean they can show us all the kills that have been in the last few installments. We are back to a movie that is mostly made up of movies that we have already seen. Between that and the constant walking around this is such a slow flick.

I don’t know why they keep doing this. They just did two movies that had interesting plots and real characters for us to follow. While those were perfect at least they felt like an actual attempt at storytelling. This is just cheap nonsense that looks like it was mostly shot over a weekend at a college campus filling in for most of the locations. I suppose if you wanted a tour of their hallways you might dig Ghost of Camp Blood, but that is about all we get. I get that they were trying to do a twist where the killer was actually a ghost that possessed people in an effort to come back to life, but it doesn’t work. Honestly did we learn nothing from Jason Goes to Hell? I guess not. 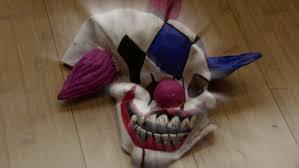 If you ignore the kills from previous movies, which I do, there are a measly six none of which are any good. There is a stabbing, a throat slash, and an arm off. I’ve seen them do all these before so I can say without qualification that they put zero effort into the special effects work. For comparison the previous movie, Camp Blood 7, had sixteen kills and many of them were creative. That movie and this were both directed by Mark Polonia so what the hell happened? This doesn’t look like it had a much smaller budget than the previous movie. Did they just have an extra weekend and shot something to release a year later? It definitely feels like leftover footage. There is even an actress from the previous installment that shows up as a different character.

The movie also uses the bad CGI rain effect, is filled with terrible dialogue, characters that are supposed to be running for their life and are actually strolling casually, and generally filled with terrible acting. I feel foolish that I had hope that the series was finally getting if not good at least passably mediocre. But this is right back in the old dumpster fire. I’d say avoid Ghost of Camp Blood at all costs. It is just terrible.

Next up Camp Blood 8: Revelations

Posted by Gutmunchers Lives at 10:51 PM