I saw this one pop up on Shudder with a lot of positive buzz, so I thought I’d check it out. The movie appears to be a British version of Wrong Turn with some mutant cannibals lurking around the canals of rural England. I could be down for that. 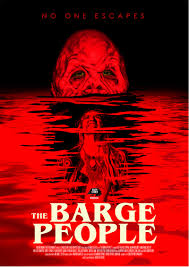 The movie kicks off with a text that lets us know that people have been mysteriously disappearing along a particular stretch of canals for the last ten years. Then we get to see a woman crawling around a tunnel watching a monster/mutant drag a body away. She is then quickly dispatched offscreen. Then we see a guy jogging who stumbles upon someone lying on the ground. I think it might be the lady that we just saw get killed but I’m not sure. He gets killed by someone or something sneaking up on him. So, two kills that may or may not be related and no explanation. I’m confused.

We are then introduced to a couple of sisters named Kat and Jade. They have brought their boyfriends along on a long weekend cruising the canals on a rented barge. Mark is Kat’s boyfriend and is a decent dude while Ben, Jade’s significant other, is your typical douche bag businessman. Yeah, he is so dead. So, they head out on their trip, have a run in with some locals, find a weird pub, and get attacked by mutants. Bodies pile up, twists are revealed, and generally you get about what you would expect from a movie like this.

This is a by the numbers fish out of water backwoods murder flick. It has that Wrong Turn hillbilly cannibal vibe that itself was a copy of movies like The Hills Have Eyes and Texas Chainsaw Massacre. Now let me be very clear here that The Barge People never rises to the quality of the movies that I mentioned above, but it does fit into that genre. As characters are introduced, I could call who was going to live and die right away, with one exception that I will talk about later. The filmmakers didn’t try and reinvent the wheel with this one and I’m okay with that. Not everything needs to be art and sometimes sitting down with a comfortable and predictable movie makes for a good time. That is of course if it is executed well and here is where I have a couple of issues.

The couple of kills at the very beginning are confusing and feel tacked on. I’m thinking that they might have been added when someone either looked at the finished film, while editing, or during the script writing process. I say this because other than those kills nothing much happens for the first twenty-five or so minutes of a movie that is only sixty-eight minutes long. We get a lot of talking, drinking, and steering the barge. You also get to see how locks work and have an extended scene in the pub where everyone says how gross it is and still tries to order food.

I’m thinking that this is done to establish the characters but after all that time we get asshole local guy and girl, rude douche bag boyfriend, sister who is totally going to die, weak boyfriend, and final girl. Seriously I keep having to refer to my notes to remember their names. These characters are paper thin with zero development. This is something else that I’m okay with… as long as you don’t spend a third of your movie trying to give character backgrounds before the good stuff starts. I’d have to say that this is a huge failure.

I also have to talk about the editing. Basically, it is terrible. I’m going to point out one sequence where Mark has to pee, but Ben is preening himself in the mirror and won’t come out for fifteen minutes because… reasons. So, Mark goes out into the woods to water the plants. He is being followed or watched by something. The next time we see him he is fishing and having a chat with Ben while fishing just in time for random science guy to stop by and tell them that the water is filled with bad stuff that killed all the fish. No connecting scene, no dialogue to bridge the gap, nothing. That is just bad editing. This is one example of many that bugged me as I was watching The Barge People.

My criticisms so far have been more or less objective. This final one is kind of a personal thing that bugs me. I’m not a huge fan of bleak endings though one of my favorite movies is Romero’s Night of the Living Dead. When done right and if they serve the story, I can be okay with it. Other English horror like Amicus’ The Skull, The Wicker Man, and more recently The Decent have all done this fairly well. Here the ending doesn’t seem to fit the movie and that bugged me. And then they double down with another pet peeve of mine and give us a bleak non-ending that only hints at something bad happening to our survivor. It almost feels like they couldn’t commit to the finale anyway so why hint at the worst outcome at all?

Now it isn’t all bad. When the action starts and the mutants show up to attack our characters things get bonkers and a bit more fun. Multiple throats get slashed, an arm gets lopped off, an axe gets planted in a chest, and someone gets hacked to death with a cleaver. While these kills aren’t terribly explicit, I give the filmmakers huge props in that they tried to do all of it with practical effects work. Blood and other bodily fluids are sprayed all over the place which put a huge smile on my face. It was awesome to see a movie not take the easy route of CGI and instead put the work into going with old school effects.

My absolute favorite thing about The Barge People has to be the creature design. Again, this is practical effects work and is brought to the screen with latex. We get not one but four unique creatures with different sculpts so they actually look like four different creatures. Between the excellent makeup and the actor’s performances underneath it these are really cool mutants that I loved. I’d put these creatures up against anything that I’ve seen in the last five or ten years.

Clearly, I have issues with The Barge People. I think it is a flawed movie and that anyone reading this review thinking about watching it needs to know the issues I have with it. But there is something here that I do like. The creatures, how nuts the last two thirds of the flick gets, the practical effects work, and yes the gooey bits spraying everywhere makes it worth a watch. So, despite my issues I’m going to recommend everyone give it a watch. There is something cool here and I can’t wait to check out what the director and writer do next.