If you have read my reviews here at the site, you know that I have a weird relationship with found footage movies. I keep saying that as a rule I hate them, but yet I keep reviewing them. And if that weren’t confusing enough, I’ve had some decent luck of late. I rather liked As Above So Below and The Bay was a decent movie so there are some positive reviews. But I kept pressing my luck and sure enough I found a movie that reinforced my dislike for the subgenre of found footage. 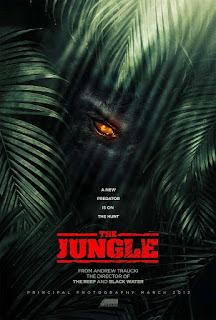 The Jungle is about a guy named Larry who is determined to prove the existence of Leopards in the jungles of Indonesia so that the government will work harder to protect their habitat. We get to see him show off the gear he is going to use while having it setup in his backyard. This consists of him talking to his cameraman. We also get to briefly meet his wife, who looks concerned about the trip. No foreboding there am I right?

The pair travel to Indonesia and meet up with Adi and Budi, the locals who are going to help them track the leopards. They also meet a lady who warns them that there is bad mojo where they are going. That won’t be important later or will it? We then are treated to the four characters wandering around the jungle bickering about turning back. The tracker keeps wanting to bail and despite theoretically being in charge keeps being convinced to continue. I mean the guy knows something bad is going on and yet he keeps going. That doesn’t make much sense to me.

We get more wandering around and arguing before they find a dead Jaguar. Something killed an apex predator and instead of “hey let’s leave” Larry is like “we need to keep going”. Just to be clear they all agree that it wasn’t a man who killed the leopard and leopards are supposed to be at the top of the food chain. After convincing the tracker to keep going, because again he clearly knows it is dangerous, they find some cat poop and a partially eaten human hand. That finally sends them scurrying out of the jungle, but it is too late. Sure enough the big bad creature has finally noticed them and is in the mood for some people for supper. The Jungle is a prime example of the sort of lazy filmmaking that so many of these found footage flicks represent. Instead of making any effort to have good dialogue or interesting characters with actual story arcs they lean into the “realism” of people walking around the jungle. That doesn’t make for a good movie. That doesn’t even make for a good episode of that silly television show Monster Quest. At least there they have confessional style interviews to break up the monotony of people talking and walking. Here we simply get eighty-four minutes of nonsense with one single bit of excitement a few seconds before the end credits roll.

There are a couple of times where the movie could have given us a good jump scare, but they keep pulling back from it. When they do finally toss one at the audience, I was so bored I didn’t care. The only time the movie got close to being creepy was when you see a pair of arms hugging a tree as something was slowly crawling down it. That was decent, but it is followed up with nothing.

I was very disappointed with The Jungle. The director, Andrew Traucki, is responsible for a great Crocodile flick called Black Water and did the shark movie The Reef. I had expected more from him as I enjoyed both of those. Sadly, this movie is a complete waste of time and I recommend staying far away from it. Do not watch The Jungle!

Posted by Gutmunchers Lives at 1:28 PM