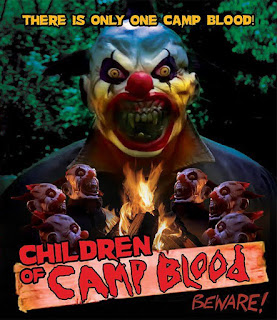 Well, we have reached the end… at least for now. There are rumors of another Camp Blood movie coming. But until then this is the eleventh and last in the franchise. Mark Polonia returns as the director. This is his fourth bite at a Camp Blood movie so I’m hoping for the best. I mean one of the previous three wasn’t terrible. Someone has decided to open up a rehabilitation clinic at Camp Blood. That seems like a terrible idea since people keep dying there. They double down though with the first batch of patients being people who are dealing with the premature deaths of loved ones. Those deaths were due to them being killed by the clown. I’m no expert when it comes to therapy, but this sounds like it won’t end well. Sure, enough the homicidal clown shows up and starts killing everyone. But who is the clown? Well, it is the brother of the original killer because that makes sense. I suppose that was a spoiler but if you have ever watched a horror movie it is obvious who it is.

They did it again. This story exists solely to have characters sit on a couch and “tell” the stories of why they are so screwed up. Those stories are an excuse to dump in footage from earlier movies. Not only do they reuse the kills, but we see entire scenes of dialogue. I’ve already seen and disliked those flicks I don’t need to watch them again! When we aren’t watching the “greatest hits” of earlier movies we get to watch characters walk around with some terrible dialogue mixed in. Honestly nothing new or interesting happens until we are past the forty-minute mark.

I don’t want to give the impression that the movie gets good after that point. It is just less bad than before. The kills are lame and are all call backs to what we have already seen done better in earlier movies. I mean we literally just watched some of those kills in the therapy sessions. There is an axe to the face with an annoying CGI assist and a head gets cut off. Most of the rest are offscreen or forgettable. Overall, this is a downgrade from Camp Blood 8 and remember that movie including those kills were played for laughs.

The movie is also awkwardly shot. Like we have an actor clearly waiting for the clown to come up and stab him. Why? It isn’t even a good effect shot and just feels clunky. The acting is a bit off as well. I won’t call it bad as they get their lines out but it falls flat. There is also a call back to the random lady we kept seeing in Ghost of Camp Blood like that is supposed to explain something. But the already establishes that those events happened much earlier, the son of one of those victims is in this movie, so she couldn’t possibly be the same woman. Unless the haunted mask from that movie was showing the events from this movie? You know I’m probably putting more thought into this than the filmmakers so I’m out. In reality I’m thinking it was just another excuse to reuse footage.

This isn’t the worst of the Camp Blood movies. Then again that isn’t a hard bar to clear. What I can say is that I don’t see any reason for people to waste their valuable time on this mess. And before anyone emails me to ask if I’m really going to watch the next movie if and when it comes out. Yes, I am. Why? Because I’m an idiot.

Posted by Gutmunchers Lives at 9:16 AM