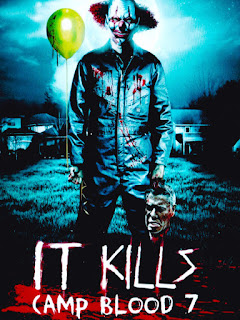 It only took them a year to crank out another Camp Blood flick. They changed directors again with Mark Polonia returning to direct a script from Amy Suzuki. I wasn’t thrilled with Polonia’s earlier effort, but I normally like his movies, so fingers crossed this one is better.

There is a brief voiceover establishing the history of Camp Blackwood, aka. Camp Blood, before meeting a couple chilling out on their boat in the middle of the lake. She gets topless and he sparks up a joint. Okay movie you know the formula. They notice a creepy clown watching them from shore and before you know it people are getting pulled in the water and slaughtered. Nice way to kick things off. Roll the opening credits.

We get introduced to our main cast. They are headed to some event and stop at a store long enough to have issues with the locals. They don’t take kindly to city folk you see. Then they take a shortcut and pick up a hitchhiker named Bishop. He is looking for his wife who went missing around Camp Blackwood. They drop him off and decide to stretch their legs by checking out the camp with him. When they go to leave the car is missing and they are stuck spending the night at the camp. Of course, the clown is around and starts to stalk them. One by one they are picked off until we get our final girl.

This is a by the number’s slasher movie. You get isolated characters getting murdered in predictable ways and in the order you would expect. Almost immediately I knew who the final girl would be and in what order the characters were likely to die. And all of this is okay. There is nothing wrong kicking back and watching a familiar movie like this. The story is paced well enough that I never felt the need to look at the clock and didn’t get restless at all. The characters are fine and while the acting at times is a bit rough this is about what I’d expect from a low budget slasher movie. They do the normal silly stuff like fight and split up only to be brutally killed. But again, that is the formula, and I can’t hate on them for following it.

The kills aren’t particularly great, but I consider them acceptable. We get too much CGI used and the practical effects are a bit goofy. That includes what appears to be a papier-mâché head floating in the water. But we do get a couple hands lopped off and wheelchair dude gets a machete thru the top of his head. These aren’t stellar but again for the budget it’s not too bad. Speaking of CGI, we also get some digital rain that looks awful and it isn’t helped by the fact that the cast is perfectly dry when they step out of it. I was also annoyed at the continuity of the killer seemingly being able to jump all around the place. Honestly, I thought there was going to be a twist where there were two killers. It was that obvious.

By this point my expectations for the Camp Blood franchise are clearly very low. That said this isn’t a terrible movie. While it does suffer from many pitfalls of the low budget, especially when it comes to the effects work, it is a decent flick. The story is familiar, fun, and good enough. I’m okay with that. Do I recommend this one? There are better slasher flicks to be had, but if you want to watch a Camp Blood movie there are a lot worse choices than It Kills.

Next up Ghost of Camp Blood

Posted by Gutmunchers Lives at 3:05 PM