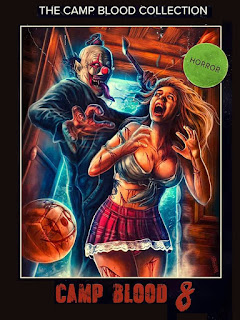 It took ten attempts, but someone finally made a Camp Blood movie that I liked. No qualifiers here either. Camp Blood 8 is a decent movie with a fun story and cast. But I’m getting ahead of myself. This installment of the franchise was written and directed by Dennis Devine. I wish he would do more.

The movie starts out with “20 Years Ago” and a girl running the woods. She is being chased by a guy wearing clown makeup, not a mask. Somehow that is even creepier. He catches her and then cuts her throat as she begs for her life. Then the action moves to some girls playing volleyball on the beach. I’m fairly certain it is also jumped to “now” as the killer seen previously will be mentioned later as having been gone for years. The girls are very attractive and in bikinis. Movie you have my attention.

Those ladies end up in a car driving to a tournament when they take a shortcut and end up stranded in the woods near Camp Blood and of course the car breaks down. They get stalked by a clown wearing a mask, this change is explained later, and are yelled at not once but three times to leave the woods. This is a recurring gag that I liked. You have the old guy telling them to leave and then getting mad when they don’t listen. Only they do and ask for directions which he ignores. Then they meet survivalist Fred who also warns and then ignores them when they ask for help getting out. Finally, we have a ghost, one of the girls can see dead people, who is utterly useless and knows it.

There is also a storyline with the girl’s coach which explains why they are in the woods and being killed. There is a bit of fun with a captured girl being made to sing to a MILF’s boobs, a survivalist with a blow-up doll girlfriend, and a girl that keeps eating stuff off of the ground. All of this leads to the final girl doing battle with the killer clown.

In case you haven’t figured it out, yet this movie is playing the story for laughs. Don’t worry though as we get some creepy stuff too. The clown lives near the woods with his mom who is very affectionate with him, VERY AFFECTIONATE if you understand my meaning here. His dad was the original clown and was killed by his mom who was annoyed with him. The son isn’t good enough to use makeup, so he wears a mask. Though eventually he tries the makeup out and goes after the girls. This explains why the clown looks different throughout the movie.

The jokes aren’t beaten to death and are played well by the cast. There are some funny lines as well as amusing characters. Shaun C. Phillips is good as Survivalist Fred. He plays awkwardly weird about as good as anyone I’ve seen. Though my favorite character is Brandy, played by Emilyrose Morris. Seriously playing a dumb blonde isn’t as easy as you would think. Her timing is perfect and she kills the delivery of her dialogue. Between these two and some of the absurd situations in the movie I laughed more than once.

The kills are fine. We get a decent throat slash, a beheading, and several stabbing. Sadly they do the CGI blood splatter which I loathe, but this isn’t about the body count as much as it could have been. I’ll give them a pass. The filmmakers did do an excellent job with the music matching it up well with the scenes. Considering how many times this franchise has just blared generic rock music at us this was a nice change. I also though that the movie was shot nicely and whomever did the lighting for the night scenes knew what they were doing.

Camp Blood 8 is worth checking out. I love the fact that someone decided to have fun with the killer clown and toss some humor into the movie. While the horror portions of the movie are fine the comedy lands so well that it elevates it into something worth checking out. I recommend everyone track down a copy.

Next up Children of Camp Blood

Posted by Gutmunchers Lives at 4:32 PM