I’ve never seen a Camp Blood movie. In fact, I’ve actively ignored them. But when I found out that there were eleven of the damn things and that some friends of mine have already done a marathon of them, I knew that I had to join in. I mean how bad could they really be? I’ve seen some horrible movies so I’m sure that I can survive these. 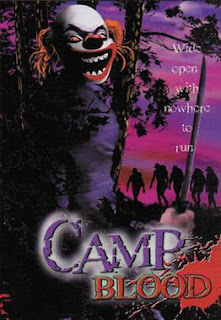 The movie opens with a couple walking thru the woods. She is looking for an elusive bird and he is checking out her butt. They stop and get frisky when a clown shows up and kills them both. Then we meet our main characters. Couples Jay and Nichole as well as Steve and Tricia have decided to go camping. Jay has hired a guide named Harris to take them out in the woods. Before they get to the woods and meet the guide, we are introduced to a couple of hunters who find the lady bird watcher and then are dispatched by the clown. Then we get some scenes of the couples walking to camp, setting up tents and telling ghost stories. They wake up the next morning to find Harris burned up and dead. Lost in the woods without their guide the couples try to get out as the clown stalks them.

For the briefest of moments, I thought we had a good movie here. Initially the pacing is spot on with the birdwatcher and her boyfriend getting stalked and killed. There is some nudity and gore right away. I was thinking to myself ‘they understand the formula’. But then the Camp Blood goes off the rails. We get a lot of walking and talking to pad things out, which is odd since the movie is only seventy-three minutes long. But they clearly didn’t have enough material to fill out that time, so this is what we get. For a decent stretch of the movie, we don’t have any kills, which for a slasher flick isn’t a good thing. The movie is backloaded with some fun stuff in the last ten minutes or so, but that is ruined by the ending. This is one of those flicks that has an ending, then another ending, and then yet another ending.

Tricia, our final girl, manages to kill the clown by running them over. The car never stops, and she continues to drive down the road to safety. Cool ending… but wait. Suddenly the clown is in the back seat and chokes her out. Bummer ending no one lives… but wait. Tricia wakes up in a mental ward being interviewed by a doctor and detective. So, she must have lived. But they think she killed everyone. Fine Camp Blood has a triple twist… but wait. The doctor, detective, and nurse are played by the same actors that portrayed her friends Jay, Nicole, and Steve. So, is she maybe just delusional? I’d say that they were trying to be overly clever but without all these different endings they wouldn’t have hit that magical seventy-minute mark to sell the movie as a feature.

The low budget kills are my favorite part of Camp Blood. We get ten kills with the highlights being a machete to the chest, a neck getting snapped, another machete attack to the neck, and a burned-up body. Though my favorite kill is a nicely done machete thru the noggin’. The acting is okay, and the movie is mostly shot during the day. The night scenes around the campfire are poorly light and hard to follow. But nothing much happens during them, so it didn’t bug me too much.

Camp Blood isn’t a good movie. Neither is it terrible. This falls into the mediocre category which means it is utterly forgettable and a by the number’s slasher flick with pacing issues. I can’t recommend it.

Next up Camp Blood 2