This is the second book of Halkin’s that I’ve read for review here at the website. Though they share a similar title Slither is unrelated to that earlier book, Slime. The only thing that they share are familiar themes of nature run amok and mankind’s unwillingness to acknowledge a threat right in front of him. In Slime it was killer jellyfish and here with Slither it is killer worms. You know I really do love these Eco Terror books from the seventies.

Our main character is named Matt Parker, a cameraman for television programs. When we first meet him he is in the sewers under London shooting a program and is immediately faced with some strange worm like creatures. Let me take a moment here to clarify the monsters. They are referred to as worms but are really legless lizards or salamander type creatures. Why not just call them snakes you might ask? Well they don’t constrict or inject venom, but are actually the ripping, tearing, and chewing kind of critter. We find that out pretty quick as they attack and tear Matt up pretty well.

The remainder of the book is Matt’s crusade against the worms. He sees the threat as they continue to grow to larger sizes and multiply in numbers. In spite of some horrific things that happen neither his bosses at the T.V. network, nor his family believe him. There is even a line from one of the “experts” where they are called no more dangerous than Ferrets. Clearly this isn’t the case, but will anyone believe him before it is too late? Along the way Matt nearly loses his life, daughter, and spoilers coming… does lose his wife to the worms. 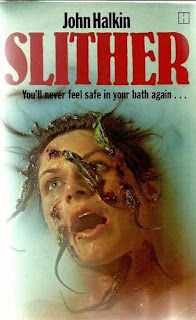 This is a great read. We jump right into the action with Matt’s attack and are then introduced to the other characters establishing the world in which the story is going to take place before getting back to the worms and people being eaten. There are a few sequences where characters are introduced for the sole purpose of being added to the menu. This could be boring, but each death is handled uniquely enough that it never gets old or feels repetitive. Halkin isn’t breaking any new ground here and is telling us a by the numbers monster tale, but he does that very well. As a reader I found myself satisfied with what I got. With that said I also wanted to point out a few things I noticed between this and his earlier book.

While I enjoyed Slime, I had some issues with it that I think are handled much better here. First up the kills in Slither are much nastier and described in gorier detail. This is a creature story and I want them to be both scary and disturbing at the same time. Fingers get gnawed off, guts are spilled, private parts are on the menu, and they aren’t afraid to kill unexpected characters. There are a couple of deaths that I didn’t see coming at all until they were dead on the page. That is a nice bit of writing and made the book a page turner which I finished in a couple of sittings. It would have been one, but I did have to get up for work the next morning.

The characters are more likeable here as well, especially the women. In the previous book Halkin spent a lot of time seemingly going out of his way to make the characters unpleasant. While Matt isn’t the nicest of guys you do end up rooting for him and his family in the end. He has flaws but I found him to be a decent protagonist for the story and that kept me engaged as the reader. It felt like an us versus the worms mentality which much like my previous point kept me interested in the book.

I’ve been digging these British authored Eco Terror books. Guy N. Smith’s Crab series, James Herbert’s The Fog, and Halkin’s Slime and Slither have all been fun reads. Of the ones I’ve mentioned I’d say this is second only to Herbert’s The Fog. I highly recommend Slither as a nice way to spend an afternoon flipping pages. You won’t be disappointed.