The other night I’m digging thru a bunch of DVDs and Blu-Rays that I retrieved from my storage locker. It was time to start weeding out the collection again you see. This one caught my eye as it was a flick that was made to air on Sci-Fi channel a few years ago when they still showed original movies. I thought it was time to give it another look. 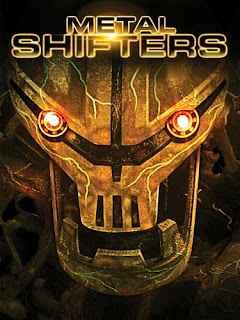 Things kick off with a Russian satellite getting knocked out of orbit by some space junk/meteor that it runs into. The thing crashes into a field next to a depressed town, all the foreclosure signs give that away, in Idaho. A couple of enterprising brothers load it up and take it to the local junk dealer. A price is agreed on, and they leave it in his yard. Where things get dicey is when the green space gunk covering the wreckage that can also bring metal to life attaches itself to the giant metal sculpture that the owner had been working on. Suddenly you have a metallic monstrosity stomping around the countryside killing everyone that it touches. Oh yeah, I forgot to mention that the green gunk is some kind of germ or bug that eats metal, including the iron present in human blood! Get touched and get dead.

This is the cheesy Saturday night Sci-Fi channel movie in all of its glory. Cheaply made with a silly premise Metal Shifters delivers everything that a viewer like me wants to see. Small isolated town that can’t escape, the gunk gives off an electrical field that kills the cars and has to hold up in a location waiting for the solution to their problems to present itself. All the while they get picked off one at a time. This is the classic monster movie formula, and they use it very well here. Toss in a “B” grade actress that you might have seen before, Nicole de Boer from Star Trek DS9, and kill a character that you wouldn’t expect to die to let the audience know that sometimes the rules might not apply, and things get interesting. 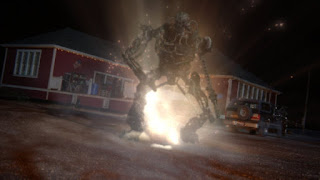 The movie also knows what it is, and I appreciate that. Without insulting the audience, the filmmakers’ sort of poke fun at the genre with some jokes and comments here and there. For example, the junk dealer is accused of being a wizard by a bar patron because of his golem, they keep referring to the traditional Jewish monster in the dialogue. Also, the eventual secret weapon they use against the monster is funny considering where they are hiding for most of the duration.

The special effects work is decent. The “monster” is brought to the screen thru the use of CGI and some practical effects work. I was especially fond of the giant claw that keeps reaching in windows trying to grab the cast King Kong style! The digital work when we see the entire thing stomping around isn’t too bad for the budget. Though there is a bit at the beginning where we see the satellite get hit that was pretty awful. Overall, I was satisfied with what was on the screen.

Good story, paced well, decent characters, passable effects and creature. Metal Shifters is worth a watch. Not great but it will scratch that monster movie itch if you are looking for something different to check out. I think you can find this pretty easily either on physical media or streaming. Give it a shot.

Posted by Gutmunchers Lives at 5:01 PM