Well, there is another remake of an old Charles Band flick. I liked Puppet Master Littlest Reich so maybe this will be decent. Plus, I was never a fan of the original Castle Freak, so I don’t have an axe to grind with this one. For my plot synopsis I debated pointing out the differences as I explain the story but decided against it. I figure that if you are reading this you have either seen the original and don’t need my help or haven’t and don’t care. With that bit of business out of the way I suppose we might as well jump in and see what we have. 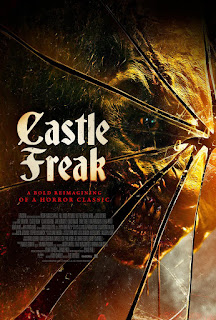 We meet our main characters Rebecca and John as they are partying with some college friends. This is important as they are students at some college in Massachusetts. I’m thinking it might be Miskatonic University since this movie leans heavily into the Lovecraftian mythos and one of the characters is sporting a t-shirt from that fictious institution. John gets liquored up and gets behind the wheel leading to a horrible accident, one that blinds poor Rebecca. Later, they don’t specify how long, the pair are in Albania checking out an inheritance from Rebecca’s long-lost mother. You know that sort of thing never ends well.

Some shenanigans happen as Rebecca hears something moving in the walls, a local drug dealer gets killed, and we get a lot of flashbacks of Lavinia, Rebecca’s dead mother. There is of course also the freak running around. Some friends from school show up to help move the furniture and sell off the valuables from the castle, which means they basically came to up the body count. People get murdered, cultists stop by for a summoning, and I think that the world comes to an end as they summon the old ones. If you know anything about Lovecraft’s fantasy world you know what that means.

I have some good things to say about this movie, so I figure that I’ll start there. I liked the cast of unknowns. I mean at least I haven’t seen any of these actors before, so it was a pleasant surprise when the lines were delivered with competence. There are a few vapid and one-dimensional characters but that isn’t the fault of the cast as they aren’t given much to work with. Many of them exist solely to get killed off anyway so I’m not going to pick at them or the movie about this. 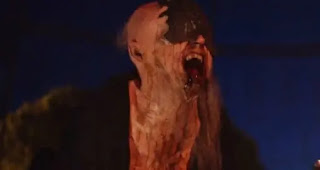 The creature design is solid, and the freak looks as good if not a bit better than the original. It is an honest to God actor in latex, which if you read my stuff you know how much I enjoy that. We get some nice sticky and gooey kills. Highlights are a head twisted around like a corkscrew, some self-mutilation thru religious practices, eyes are gouged out, and a head is squished like an overripe grape. We also get some rather disturbing… well I guess for lack of a better word alien “junk” on display as at least one character is inseminated with the seed of an elder god. This movie goes some very disturbing and fun places.

Now we come to my one complaint and it is a sizeable one. Most of all the good stuff I talked about with gore and twisted story bits happen in the last twenty minutes of the movie. This is one of those flicks that backloads all of the good stuff and doesn’t give the audience much to chew on before that. Since this movie is an hour and forty-five minutes long that is a very bad thing. Hell, the friends aka. additional victims don’t even show up until the fifty-minute mark and then wander around for half an hour before anything happens.

This seriously uneven pacing makes the first hour plus of Castle Freak a chore to get thru. While there are some cool easter eggs here and there including a random Cthulhu statue and a copy of the Necronomicon it isn’t enough to make it interesting. I don’t hate this movie and it does have a payoff at the end, but I can’t imagine every sitting thru it again. For me there is zero reason to revisit it now that I’ve seen the ending and now how things shake out. I suppose if you are a big fan of Lovecraft this one might be worth a watch. Though I can honestly say that unlike The Unnamable, another Lovecraft flick I revisit every couple of years, I won’t be watching Castle Freak again.

Posted by Gutmunchers Lives at 9:23 AM