The movie kicks off with some gravediggers in a spooky cemetery. Now that is how you start a movie! We see them dig up a grave and remove the head from the corpse inside the coffin. One of them then takes it home, kicks a naked lady out of his bathtub, and then proceeds to remove the flesh from the skull. Not long afterwards he lets out a scream and is dead. 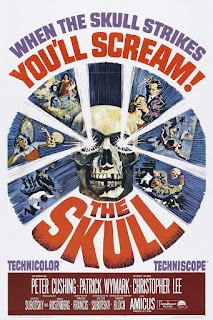 Years later we are with our main cast. Christopher Maitland, played by Peter Cushing, is a scholar of superstition and is at an auction where he is outbid on some statues of demons by good friend Sir Matthew, played by Christopher Lee. Afterwards Maitland is visited by a sketchy fellow that always seems to have things to sell. They make a deal for a book about the infamous Marquis de Sade that is bound in human flesh! The man promises to return the following night with something even more valuable.

As promised, he shows up the night with a skull, the one we saw earlier. It belonged to the Marquis de Sade and is said to have supernatural powers. Maitland is a skeptic not only in the skulls supposed powers but that it even belonged to de Sade. He mentions it to Sir Matthew who admits the skull was stolen from him and that he doesn’t want it back. This intrigues Maitland who starts to pursue it and ends up entangled in all sorts of satanic shenanigans. In the end he comes to believe that the skull is in fact very evil and that it might have been a mistake to acquire the damned thing.

This is a wonderful old school horror flick. The story is paced well and gets right to the action with the graverobbing. Never fear despite the quick start it doesn’t dump the entire plot out for us as we get bits later with flashbacks to fill in the story. I enjoy the fact that we have something spooky and mysterious happening from start to finish. This is the kind of movie where you need to turn the lights down and watch in the dark. Heck we even get Maitland being menaced by some weird Satanists! 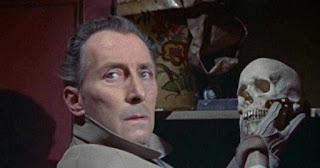 Not only does The Skull have a great story it also boasts genre favorites Cushing and Lee. There is also get blink and you will miss them appearances from Michael Gough as the auctioneer and Patrick Wymark as the sketchy dealer of stolen goods. Additionally we get direction from Freddie Francis who did some wonderful horror flicks in the sixties for Amicus, of which this is one. There is a lot of horror cred in front of and behind the camera with The Skull and it shows.

Peter Cushing does a fantastic job in his role. Much of the horror from The Skull comes from its influence on the characters as it tries to twist them into doing terrible things. The last fifteen minutes of the movie is basically Cushing doing battle with it as he fights to not stab his wife to death. He does this with no dialogue using instead his body language and facial expressions to portray the struggle within. Not many actors could convincingly pull this off without it seeming silly or overly dramatic. Cushing nails it. To a lesser extent Lee, who has a very small role here, adds some gravitas to the proceedings as he sets the stage for what the skull can do. Him not wanting anything to do with it is key to telling the part of the story that sets up what is to happen later.

The movie is also shot beautifully. The way that they use lighting both an odd and disturbing green light when the skull is active, to the strobing lights used when it is annoyed the movie finds creative ways to let the audience in on when something bad is happening. You also get some neat perspective shots like the hallway full of gas as well a neat use of mirrors to distort what we are seeing. I’m also a fan of the slightly cheesy “skull view” where the camera is placed inside the skull so we can see what it does. This is a visually interesting movie that makes the sort of absurd premise of everyone being afraid of the skull work.

I could go on but don’t feel the need to. This is a wonderful movie that I highly recommend everyone check out. I’m as big of a Hammer fan as the next guy but I’ve always thought of the Amicus flicks as overlooked gems that were on the same level as the more famous studio. Check it out you won’t be disappointed.

Posted by Gutmunchers Lives at 9:07 AM