I was poking around Hulu one night and saw this popup on the list. Being in the mood for a spooky movie I thought it was a perfect flick to check out. First thing that surprised me was that it was an anthology, though if I had been paying attention to the title, I suppose it should have been obvious. So as is the case when I cover one of these, I’m going to break each story down. 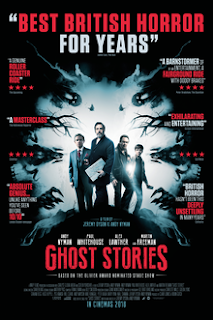 The wraparound story that bookends the others follows a skeptic T.V. personality whose show specializes in debunking and embarrassing the hucksters that prey on the vulnerable people. His name is Phillip Goodman and thru a series of flashbacks we see that he had a terrible relationship with his father, much of it revolving around their Jewish faith. This I think lead him into actively attacking all things supernatural. In another flashback we also see that he was inspired as a kid by another investigator named Charles Cameron. That man disappeared under mysterious circumstances while finishing up an investigation.

After watching Goodman take down a John Edwards style television psychic the story follows him as he receives a package in the mail. It is from the long missing and presumed dead Cameron. He has invited Goodman to come for a visit. He does and finds that his hero is in terrible shape both physically and mentally. He wants, almost dares Goodman to investigate three cases that lead him to believe that all the things they have been debunking are real. This leads to the three stories we are to watch.

The first case has Goodman interviewing Tony Matthews. The former night watchman at an abandoned mental institution has a spooky story to tell about the ghost he encountered one night at work. The ghostly little girl who was dumped scared and alone parallels Tony’s own daughter, who is also in the hospital. She is suffering from “locked in syndrome” which means she can’t move or interact with the world around her. After getting the bejesus scared out of him he starts to visit his daughter again, still traumatized by the events he experienced.

If the rest of the movie is going to be as good as this, I’m in for a treat. There are several jump scares and overall the atmosphere is good. This is a spooky story with doors slamming, lights going off, and a coffee mug that moves on its own. It starts off subtle and builds up to a great finish. The actor playing Tony has to carry the story as other than a voice on the radio he is the only character. He does a fantastic job pulling it off.

The second case is an interview with a young man named Simon Rifkin. This young man has a bad habit of stretching the truth, including if he had passed his driver’s test or not. Coming home from a party he accidentally runs over something in the road while fielding calls from his parents. If that weren’t bad enough it is hinted that it was the Devil he hit. It should come as no surprise that old scratch isn’t too happy about that and decides to let Simon know it.

Of the three this is the least scary and the weakest story. Other than one very cool bit with a hand grabbing his shoulder I didn’t find it tense at all. This one leans more into the general creepy vibe provided by the woods and the nifty bit with a tree that comes to life. Still I can’t say that this is bad I just wasn’t into it. Plus, it really isn’t a ghost story is it? Just saying…

The third and final case has Goodman visiting a man named Mike Priddle, played by Martin Freeman. He and his wife had been career people until deciding to start a family late in life. This led to medical procedures to help them conceive. She gets pregnant, but has a difficult time of it, so she ends up in a clinic under treatment. This leaves him at home alone where some creepy stuff starts happening. It leads to him seeing the ghost of his wife who had died giving birth to something not quite human. This story is told to Goodman while they were out hunting and when it is finished Priddle suddenly kills himself.

They saved the best for last. There are a ton of scares with this one as we not only get a ghost, but a creepy figure under a blanket, things stacking themselves, and other poltergeist shenanigans. Pay close attention as much of the best stuff is subtle and in the background behind the character. I love it when filmmakers make you really pay attention. The performance by Freeman is excellent and the way they stage things are perfect.

After this we then finish with the wraparound story. Goodman returns to Cameron angry that he has been set up. All of the stories can be explained away with guilt, paranoia, and/or depression. Here is where things go off the rails. Be warned I have some spoilers coming so you might not want to continue. Cameron stands up and rips off a mask revealing that he is Priddle… only Priddle isn’t Priddle. I know it is confusing but stick with me and I’ll explain. Goodman is caught up in some sort of personalized nightmare as Priddle/Cameron takes him back to a time when Goodman was young where he didn’t intervene, and an innocent mentally disabled kid died. He must be in some purgatory, therefore proving an afterlife… or maybe not.

There is another big reveal that shows Goodman lying on a hospital bed on life support. Thru some dialogue from his caregivers we find out he tried to kill himself, but only managed to put himself in a vegetative state. Or so they think so. All of the characters from the stories mirror those people working at the hospital so on some level Goodman must be aware of his surroundings. He isn’t trapped in some supernatural hell but an actual living one that nobody around him realizes he is in.

As much as I enjoyed the ghost stories the twist ending ruined things for me. It feels like one of those movies or shows where everything is resolved with the “you were only dreaming” trope. I was having fun with some killer ghost stories only for the movie to hit me with the reveal that nothing I just watched was real. I suppose that is a clever twist that might work for some viewers, but it annoyed me. That said I think there is a lot here to enjoy and while I’ll not watch Ghost Stories again because of how it ends the movie is still worth a look.