Via a digital screener I was given the chance to check out Nightmare Symphony which is currently playing festivals. I wasn’t sure what I was getting into but was pleased to find out that this is a Giallo shot in Italy and was written by a frequent Fulci collaborator Antonia Tentori. We also get a theme song from Fabio Frizzi, though I’m not sure it was specifically written for this movie it was still awesome to hear. There is some serious old school Italian filmmaking cred involved here so I was hoping to love it. 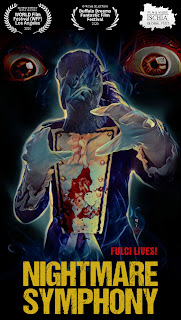 Let’s talk a bit about the plot of the movie. First thing we should establish is that this is if not a remake of Fulci’s Cat in the Brain (aka. Nightmare Concert) it was at least inspired by it. That movie has Fulci playing a version of himself that gets caught up in his latest horror project blurring the lines between reality and fiction. This movie also has us following a director, this time played by Frank LaLoggia who has directed some stuff including The Lady in White. That is a cool callback having a director play the part. Before you get annoyed with me as I will refer to him as the director in my review, they never actually give the character a name. So, I don’t have much choice.

The opening is rather brutal and sets the tone for the movie, at least the ending of it. We see a beautiful woman drop her towel and jump in the shower. A mysterious killer dressed as a Peacock is stalking her and when the lights go out and she is attacked. There is liberal use of a razor to cut her up and the camera lingers on the skin being sliced up in a neat bit of practical effects work. Not a bad way to start things off.

Then the director arrives in Rome to finish the edit on his latest horror movie. He is shown a magazine that mentions the woman’s death and is shocked. It seems that she was the start of the very movie he is editing. We also meet several other characters such as an angry actor who psyches himself up in the mirror, a rude guy that hangs around the editing bay, Izzy the director’s friend who is helping him finish the movie, as well as an obnoxious producer and a writer who is angry with what was done to his script. These characters and more act as either victims or suspects and in the best tradition of the Giallo sometimes both.

There is a lot to unpack here. The movie did a good job keeping me interesting in what I was watching. There always seems to be something happening to move the story forward. The pacing is solid and the movie clocks in at a tight seventy-eight minutes and doesn’t waste a second of that time. The main character was engaging and the supporting characters interesting enough. I was enjoying the movie until we get to the ending. I’m not sure what to make of it as they do this thing where it is possible it was all in the director’s head, or if somehow he was the killer and is being haunted. Additionally, there are so many nightmares during the movie that I wasn’t sure if this was just another bad dream. I get it that this fits with the title and the Fulci movie that inspired this one. But the one change I would have made was to give Nightmare Symphony an ending rather than keeping it vague. The movie nails the practical effects work. Seriously this is some good stuff. In addition to the lady in the opening we also get a knife to the mouth, a couple faces getting cut up with one being completely removed. A head is squished by a car and someone gets suffocated with a script. This is all done onscreen and the camera lingers on the deaths showing the audience how nicely the special effects work looks. Not only does it look good but there was an effort made to make the kills as creative as possible and, in some cases, clearly catering them to the victim. I can’t emphasize enough how great this is to see. Nightmare Symphony has that old school feel to it that I love. Far too many new movies use CGI and/or are filled with generic kills. As someone who grew up watching seventies and eighties movies this movie put a smile on my face.

The camera work is creative, and the music is perfect. Other than clearly not being shot on film, not a complaint, this movie could be dropped into a marathon of classic Gialli and it would fit right in. Again, the ending really bugged me, but I can’t ignore all the other things that I loved. If you dig this genre you will want to check out Nightmare Symphony. I heartily recommend it.