I haven’t done an anthology for a while so it was time. I figure the easiest way is to break them down in order with a plot synopsis and briefly what I thought about them. Holidays has eight segments, each one covering a holiday (makes sense, right?) without a wraparound story. Might as well dive right in. Oh, and a huge warning here there are spoilers! 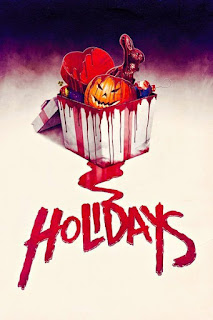 Valentine’s Day. An unpopular girl is being picked on by the rest of the swim team. The coach of the team tries to encourage her and later gives her a card. It is a rather harmless card, but we see that in her mind it is a romantic gesture. We also find out that in spite of looking healthy the coach has a serious heart problem. Can you see where this is going? Yeah, she decides to find him a heart and of course chooses one of her tormenters as the donor. We don’t get to see much of the attack but do get a nice shot of the heart right at the end. This was a strong way to start the movie and I rather liked it. Sadly, they weren’t all this fun.

St. Patrick’s Day. Set in Ireland the story immediately establishes the pagan nature of the legend of St. Patrick. This is important because a creepy little girl shows up in a teacher’s class. The teacher does her best to make the little girl smile, but nothing seems to work. That is until the little girl leaves a cryptic note and a snake made out of twine. Not long afterwards the teacher is pregnant after a one night stand and the little girl smiles at her. Only she is pregnant with a snake! Someone no one makes her go to the hospital and she refuses to get rid of it. When she does give birth, we find out that her one night stand and the girl are related and that they are all pagans. This wasn’t the worst of the batch but not great either.

Easter. This is the most screwed segment of any. I’m not sure what exactly the point is but we see a little girl being put to bed by her mother. She keeps asking questions and her mom keeps promising that if she goes to sleep in the morning there will be chocolate. But then the little girl says she is afraid of Jesus because he came back from the dead! Finally, she does go to sleep but wakes up later in the night. When she gets up for a drink of water she runs into the Easter Bunny who is also part Jesus… I think that is what they were going for. Since she saw him she has to take his place and I guess become the new Easter Bunny. This has the sense of something that is trying to be cool but isn’t. I really didn’t like this one at all and it has nothing to do with the religious stuff. It just didn’t make any sense.

Mother’s Day. Here we find a woman that really doesn’t want kids. But somehow every time she has sex she gets pregnant no matter how many precautions she takes. A doctor recommends that she head off to a new age fertility clinic run by her sister. When she arrives they drug her, she has sex with some random guy, and they keep her captive until she gives birth. Not sure what is coming out of her because the segment ends with a man’s bloody arm popping out. This had interesting moments but in the end it didn’t make a ton of sense. Still it was better than Easter Bunny Jesus.

Father’s Day. They never explicitly say but the woman who is basically the only character in this segment was abandoned by her father. One day a package shows up with a tape that he recorded the day he left her. He was going to meet someone mysterious and mentions it is a once in a lifetime chance. The tape promises if she follows his instructions she will see him again. Of course, she does follow the tape and ends up in a creepy old building and approaches a figure sitting in a chair. Something happens and then it ends. That is about all we get here but unlike Mother’s Day enough is hinted at with the tape that it kept my interest and more importantly I didn’t feel cheated. I liked this one but not as much as the next story.

Halloween. One of the reasons that I decided to watch Holidays is because Kevin Smith directed one of the segments. I’m a big fan of his work, though his horror outings haven’t been too stellar. Though Red State kicked ass! Here we find a guy recruiting girls for his web cam porn business. He is clearly selling them a bill of goods and when he arrives back to his apartment we meet his current stable of girls. It is quickly apparent that he is an abusive scumbag. After he decides to have some fun with one of them they turn the tables on him. Next thing you know he is on the webcam and in an “uncomfortable” situation. Yeah it gets pretty twisted. This is a solid entry but the next two are the best.

Christmas. Seth Green plays a father looking for that Christmas Toy that all the kids want. He arrives too late to get the last one, but when the man who got it has a heart attack he takes advantage and makes off with the gift for his son. The toy is called a UVU (you view you) and is some kind of goggles that connect to the internet and show you stuff tailored for you. This leads to his wife finding out that he left a man to die for a toy and for Green’s character to discover something even more disturbing about her. Great entry that has a nice twist ending.

New Years. We first meet up with a man who is unstable. This is obvious when he kills the woman tied to a chair because it wasn’t working out. He must meet them on dating sites because before too long he is on another date on New Year’s Eve. He is a bit awkward while talking to her but excitedly accepts her offer to return to her apartment. Looks like we are going to see him murder another person, right? Of course not! There is a twist that every horror fan should see coming a mile away. She is crazier than him. This leads to the best gore in the movie with a foot getting chopped off and an axe to the noggin’. Good stuff.

There are some fun segments mixed in with some mediocre and confusing ones. Overall, I found the movie to be okay but not great. Unlike Creepshow or Trick-r-Treat which I own and watch every October one viewing of Holiday is enough. I’m glad I watched it off of Netflix and only invested a couple hours of my time on it. That is about all of the credit I’m willing to give. It is worth a watch but not more.