I’m no expert when it comes to British television, though I do enjoy the heck out of it, but it is my understanding that there is a Christmas tradition, at least there was during a good bit of the seventies. Every year they would do a short made for television ghost themed movie. A Warning to the Curious is one of them that was recommended to me by my friend Dan. I don’t think that he steered me wrong. 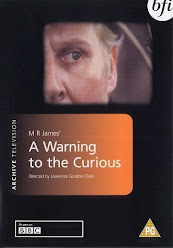 An amateur archeologist, Paxton, is on the hunt for a legendary crown said to protect England’s shores from invasion. The idea is that if it is buried and hidden away no one will invade the country. Paxton considers the legend foolish and goes looking for the item. Of course, he finds the crown and makes off with it. But what he didn’t expect was that a ghost was guarding it and pursues him to retrieve what he has stolen. After telling his story to his new friend Dr. Black he sets off to put it back. But will that save Paxton from the ghost’s revenge? Well, this is a ghost story so of course not.

This is a very British story. What I mean by that is it is a very slow burn that focuses on being creepy and not so much the jump scares that modern audiences expect. Not saying that there aren’t a few good frights, there are. But if you are expecting some slick modern scary Nun or Doll movie then this one will disappoint you. Personally, I prefer that the movie take its time and build up to the conclusion, which is exactly what we get here. While I saw the ending coming it was still entertaining because of how well it is presented. Let me talk about the best and most memorable example of this. 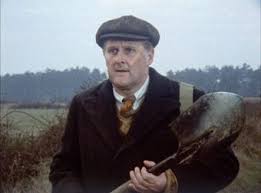 They take the time to establish that the last surviving member of the family that took it upon themselves to guard the crown died of consumption. Which is to say he developed a nasty cough and probably pneumonia. This is important because while we don’t see the ghost several characters hear a wheezing in the dark of someone trying to breath, which of course is the guardian looking for what was stolen. This includes the creepiest of the sequences with Paxton alone in his room when the lights go out and we can hear that he isn’t alone. It is such a creepy scene and I loved it!

I could go on but I don’t want to give any spoilers away and the movie is only fifty minutes long so there isn’t a much more to discuss without ruining the best bits. If you are looking for a classic ghost story then you might want to track down a copy of A Warning to the Curious. I enjoyed it a lot, so much so that I’m interested in finding the other entries into the series. I also found out while researching this that the BBC revived the series fifteen years ago. Might need to check those out as well. Consider this a recommendation from me.