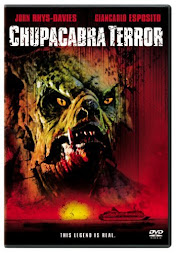 More made for T.V. fun with another Sci-Fi channel flick. This time John Rhys-Davies of Lord of the Rings fame does battle with the legendary Chupacabra onboard his cruise liner! It all starts off when a Cryptozoologist sneaks a captured Chupacabra onboard to take back to the United States. Mostly he does this to prove to his critics that he was right to pursue the creature. Of course, the men whom he told not to open the crate proceed to do just that. I mean if he is going to spend all that money for them to sneak it into the cargo hold there must be something good for them to steal. You just can’t trust criminals these days…

Anyhow once loose the Chupacabra tears thru the passengers rapidly. Though they do manage to almost trap it when the damn cryptozoologist props a door open so it can escape. Really dude what were you thinking? Lucky for us he gets his proper comeuppance when he comes face to face with his prize. Eventually some Navy Seals show up and more violence happens before they finally decide to blow the ship up. Situations like this are why I won’t let my wife book us on a cruise!

This is a silly movie filled with characters that do dumb things when faced with a monster that is killing everyone. The most egregious character is the cryptozoologist that keeps trying to save his monster to prove he isn’t crazy no matter how many people get killed. How is he going to get away with it? Does he think that he can get it off the ship after all the mayhem? Of course not, but you have to have a mad scientist in this kind of movie. Someone needs to be obsessed with getting their “white whale”. We also get a gigolo that gets killed going back for his stolen money and Navy Seals that keep shooting a bullet proof monster. None of this annoys me because it is par for the course when watching a cheesy monster movie, in fact it is almost a necessity.

Where many of these movies fail is uneven pacing, poor creature design, and lame kills. Chupacabra Terror nails two of these and is okay on the third. First the movie gets right to the action, introduces our characters, and then jumps right back into the chaos. There is a lot of creature and not a whole lot of wasted time. That makes for an entertaining hour and a half. The creature is fantastic compared to the CGI nonsense that we normally get from these movies. It is a guy in a suite and is brought to the screen with practical effects work. Not only does that have an old school vibe to it but it also is decent work. The only disappointment I had was with the kills which are tame even by T.V. movie standards. Most of them happen off screen and we don’t get much blood at all. The goriest kill is a Yorkie that ends up as a snack. God Damn it movies leave the dogs alone!

Other than the dog killing I have no complaints about Chupacabra Terror. It is a solid movie that knows what people expect and gives it to them in a decent package. Not a classic by any means but some good old monster movie fun. If you get the chance check it out.

Posted by Gutmunchers Lives at 2:22 PM