Time to kick it with another old school ABC movie of the week. This time the legendary Peter Graves plays Steven Anders. Along with his son and daughter they are in a cave digging for fossils when something strange happens. An earthquake almost drops the roof on them and when they make their escape, they find that their cook and guide is sick. He tells them that there was a bright light that coincided with the earthquake. He eventually dies and turns to a dust. They make their way to town and find out that everyone or most everyone else has also turned to dust. The rest of the movie is the family and a few stragglers they pick up along the way as they try to make it home where they hope that their mother/wife is waiting for them. 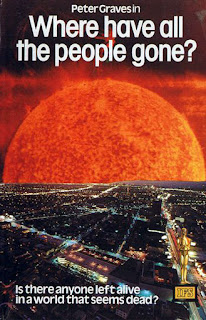 This is an extremely simple yet effective story. We have a small group of characters that get stranded in an unfamiliar place and must make their way back home. This extended road trip gives the narrative it’s structure and is what everything else revolves around. Another great bit of writing is how they manage to slowly dole out information to the audience while keeping enough of it in the dark so as to keep you engaged and wanting more until the very end. The cook lets you know that something is up, and it is killing people. Then we meet a catatonic woman, so there are other survivors. A dog shows up which introduces the fact that the animals have gone mad. There is even a bit with a guy stealing their ride showing that people might be the real danger.

I was also surprised by how dark the movie can get at times, especially given that it was a made for T.V. flick. While you don’t see it on the screen, we do get a story about a pack of mad dogs killing and eating the woman’s kids! We also see a young boy orphaned when some looters gunned his parents down in front of him. Finally, there is the ending, which I won’t spoil here, but has the potential to be a real kick in the butt! Toss in a line from another character that some people have gone crazy like the animals for an extra twist. This is solid story telling.

The most familiar face in the cast is the before mentioned Peter Graves. While not spectacular he is solid. The guy brings a seriousness to what could have been an absurd situation which makes the movie work. The late great Noble Willingham has a small role, and a very young Kathleen Quinlan plays Graves’ character’s daughter. While I didn’t recognize anyone else the entire cast is very good.

So, I need to mention the one thing that most everyone who watches this movie might notice. You have a stellar event that kills some people turning them into dust as well as making animals and some people crazy. Does that sound at all familiar? Substitute a comet for the sun and you have the plot to Night of the Comet. Someone clearly saw this when they were growing up and either consciously or subconsciously remembered it!

I really like this movie and am surprised that more people don’t talk about it. It might not be Kolchack or Gargoyles good, but it is a damn fine piece of science fiction. If you are looking for an end of the world flick that doesn’t involve zombies or aliens, then I highly recommend Where Have all the People Gone.

note: I've linked the entire movie above since it is readily available on YouTube.