The Camp Blood marathon continues. It took them five years to make another entry in the franchise. This time things kick off with a couple making out in the woods… wait a minute this is how they all start off. Anyways someone is creeping on them and that someone is the clown who shows up and kills them both. Roll the opening credits. 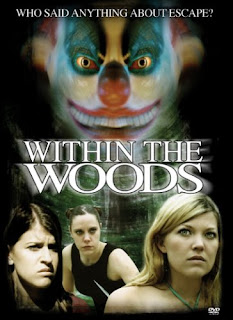 There is a sleazy producer who wants to shoot a reality show at Camp Blood. He offers five people the chance to spend the night there for his new show called Within the Woods. In addition to being a reference to the short film that spawned Evil Dead this also references the movie within the movie from Camp Blood 2. Anyone left in the morning gets to split one million bucks. He has the place covered in cameras and has a stuntman there to wear the mask and scare the hell out of the contestants. Of course, the “real” clown is also there and after making short work of the producer’s assistant and the stuntman starts to take out contestants. This leads to some more running around in the woods with a clown showing up now and again to knock someone off.

This is the third time around for writer/director Brad Sykes and I’m very disappointed. You basically made the same damn movie three times in a row and they have gotten progressively worse. Not only does the script have the same plot holes as previous entries. Like who killed the couple before the opening credits when it is revealed that the killer was one of the contestants and this took place before the show? They did the same damn thing is Camp Blood 2! Plus, how do you keep making the same mistakes in pacing. This movie is every bit as padded as the earlier flicks. Though at least it isn’t filled with flashbacks like Camp Blood 2. Still if you are going to write the same movie three times, I’d like to think you would get better at it. Sadly, that wasn’t the case.

It just isn’t the writing that hasn’t improved or gotten worse. I’m not sure if they were using bad equipment but there are some serious issues with the cameras. Mainly they must have had a couple of them because one has this odd frame that cuts off the image around the edges. It is very obvious when 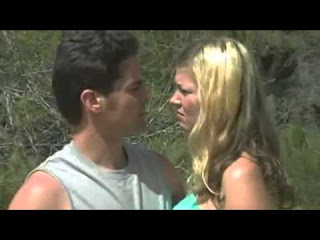 they switch back and forth between them and after a while it got annoying. There are also a couple of different scenes where the boom mic is obviously in the screen. They never had this issue before so what the hell happened here? Did you not have a good crew this time around?

The kills and special effects are also a huge downgrade. A lot of the kills are offscreen with a body covered in some red goop dropping into frame. You do get a severed hand, which we have seen them do before. Hell, it might be the same prop… The only good gag is an eye getting poked out with a stick. Even that isn’t as good as some of the stuff we saw in the first two movies.

As a viewer I expect a low budget filmmaker to get better as they make more movies. Here Sykes makes more mistakes and brings way less to the project than he did previously. I can say that I’ve not checked out his other work and I know that he has continued to make movies. I’m not in any hurry to check them out. But then again, I was never interested in the Camp Blood movies and I’m watching them now. My advice is skip Camp Blood 3. It is a bad movie and a waste of time.

Next up Camp Blood First Slaughter