Well by now I have to admit that I’ve become a fan of Largent’s work. I’ve already reviewed three of his books for the website and this makes four. Is this as good as those other books? (The Witch of Sixkill, The Lake, and Black Death) I guess we will have to read it and see.

Elliot Grant Wages is a hard-drinking author and author in residence working on yet another book of spooky happenings. An old friend sends one of his student’s Elliot’s way with an interesting story. In the northern reaches of Canada strange tragedies happen every eleven years that have otherwise normal communities falling victim to murder, mutilation, and cannibalism! Thru the research of the grad student, Brenda Cashman, he put on the track of the odd events and figures out where the next event is likely to take place. Of course, he bright idea is to go check it out and Brenda forces her way along with him.

The pair end up in a small town called Chambers Bay, which had already seen strange animal mutilations. The first night they are in town two kids are found dead behind the motel. This is only the beginning as a fog rolls in and cuts the town off from the rest of the world. More bodies appear and Wages figures out that they are up against some ancient cult that has a deadly ritual every eleven years in an attempt to summon their God back to them and break a curse. This leads to a big showdown with many casualties and perhaps an end to the killings. 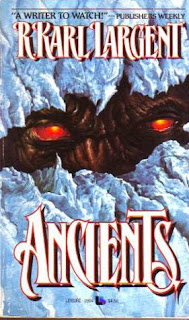 I’ll be damned if this isn’t another great read. Largent sets things in motion with a couple reports about earlier events and then seals the deal with one from a survivor from an earlier attack. This sets things up quickly without giving much away. By the time our characters end up in Chambers Bay for the main action of the book the reader is primed and ready for it. The town is filled with creepy characters, some who are what they appear and others that aren’t. A couple of times I thought I had things figured out but then we get another twist. These twists aren’t just there to confuse the reader, but actually fit well with the story and by the end all make sense. That is the key to a good use of twists is that when the story is resolved you need to have that “Aha” moment where it all fits together. You get that here.

This is a bit of a spoiler so be warned. Okay that is enough waiting, I guess. Initially you think that there is one creature but there ends up being more than that. The attacks start off small, but then the locals start dropping like flies. The kills and attacks are well described and while not as gruesome as other monster stories I’ve read I found them satisfying. This is helped by the origin of the creatures and by the time that Largent takes in describing them.

This time last year I hadn’t even heard of R. Karl Largent and now he has become one of my favorite authors. I picked up another of his novels at my local used book store today with intentions of reading it soon. It just so happens I think that our old friend Elliot Grant Wages is looking for Nazi gold! Yeah, I’m excited about that one. I highly recommend this and the other books of his that I’ve read, I posted links above for details.

Posted by Gutmunchers Lives at 1:24 PM