I saw this pop up on Netflix and thought I’d give it a chance. Things start with a fisherman waking up on the deck of his small boat with a horrible sound echoing and dead fish surrounding him. There is also what I think is an empty dog collar hanging off the side of the boat. Damn it movie you just had to go there! Then things switch over to some guys drinking in a bar. One of them is named Harry, and he is the son of the fisherman was saw waking up on the boat. He ends up driving a friend who I will call conspiracy guy home. Along the way they hit a bird. That seems weird. 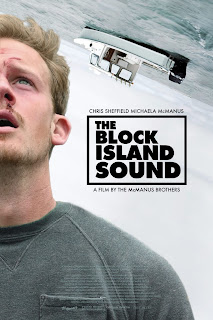 Finally, we are introduced to our third important character Audrey. She is Harry’s sister and a scientist who is called home to the island to investigate a fish kill off. It is revealed that nine or ten tons of dead fish have washed up on shore. That seems bad. We get some electronics freaking out, their dad the fisherman acting strange and disappearing, as well as more dead birds. Harry starts losing his mind like his father did and it just goes downhill from there. What is up? I don’t want to spoil that for you.

The Block Island Sound is an interesting movie. It has a spooky vibe and takes it’s time showing you what is going on. Along the way we get a lot of ideas including the fact that Harry and his father might be sensitive to electricity and that the new wind energy plant could be messing with them. What about the voices, and electronic noise? The filmmakers do a good job making sure that we only see that happening thru the eyes of Harry. So, it is entirely possible that it is all in his head. That was an excellent job of storytelling.

We do have ideas of aliens, government conspiracies, and the like, but these are presented by a couple of characters that are presented as disturbed. You almost feel bad thinking they could be right. Many movies like this try to get you to be a believer but this one leans into the audience being skeptical. I liked how they managed this. In the end we do have an explanation of sorts that I won’t spoil here. The Block Island Sound is the kind of movie that will be ruined by knowing too much before you go to watch it. 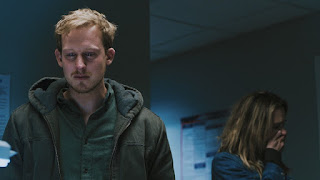 My biggest complaint is that the movie is slow. It takes a while to build up any steam and you really don’t see that much action until the very end. And even then, the payoff is satisfying but not exciting. It is way less action and way more science fiction. The big reveal refers to a line that Audrey says, one that she said to her daughter earlier. Again, I can’t even tell you what the line is because that itself would clue you in on the ending. That is the kind of movie that this is.

I know that I’m not giving you a lot to sink your teeth into with this review. I can tell you that I enjoyed this movie and recommend it. Remember now that you should avoid Googling The Block Island Sound and getting any spoilers. That will ruin all the fun.