I watched this movie based on the title alone. I mean Space Ninjas… am I right? Sadly, I need to stop doing this. Blind watching movies because they have a cool name is not the way to make good decisions. 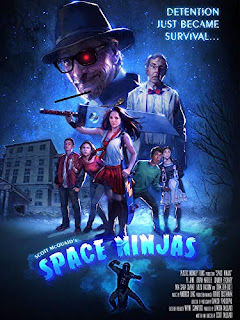 The movie starts with and ends with a wraparound with genre favorite Dirk Benedict from Battlestar Galactica and A-Team fame as Jack Strange. He is the host of a spooky television show and is telling us about the tale of an exclusive high school in Asia where weird stuff happened. This is how the movie is bookended and feels tacked on so that they can feature him on the poster despite him barely being in the movie and never interacting with the characters.

The rest of the movie are some high school stereotypes, the jock, the shy girl, the nerd, the popular girl, and the bad girl. I could give them names, but they are so bland that I’ll just refer to them as their archetypes. The lights flicker and then aliens! Seriously that is what happens. And when I say Aliens, I mean guys in leather motorcycle outfits with modified helmets on. They carry various “ninja” weapons which is why they are space ninjas. They mow thru the students and anyone else in the building for padding… er I mean extra victims until there is a final girl. The end.

This is a bad movie. I wanted to like this one, but I just couldn’t. The story is overly simple and repetitive. Split up get killed, meet up get killed, split up again, rinse and repeat. There is no character development as well as zero explanation for why the aliens are there or why they attacked the high school. I get that this movie is playing it for laughs but you still need a story, even a dumb one. Speaking of laughs I didn’t think any of the jokes landed. This isn’t a funny movie at all, which is bad considering they are trying to be. From the word play involving a random teacher who can clone things and is apparently some sort of mad scientist to the janitor being legendary Godfrey Ho I understood the references but didn’t laugh.

We get quite a few kills in the movie. Sadly, they are all brought to the screen with some horrible CGI. Heads, arms, and legs go flying. Another person slides slowly down the blade of an absurdly oversized sword (someone likes anime), This sounds good but again it is awful looking. The odd part is they either didn’t care or were proud of it because they linger on it for far too long. If you are going to have terrible special effects don’t leave them on screen that long.

The cast is okay I suppose. There are times when the actors stumble over lines and takes that probably shouldn’t have made it in the movie. But I’ve seen much worse, so I’ll not harangue them too much. I think that they missed an opportunity to have some fun when they had Godfrey Ho in the movie. Instead of having him dispatched by the ninjas maybe he could have had an epic battle with them using his mop. That is what I thought they were going for, but nope. Its like they were trying to make a bad movie and not in a fun way. I don’t recommend spending your time or money on Space Ninjas.

Posted by Gutmunchers Lives at 11:55 AM