This movie kicks off with a speed boat delivering a navy man named Commander Wayne to a support ship that quickly delivers him to an underwater facility called sea lab. He has been sent there because the scientists assigned to it have been tracking a submarine that keeps buzzing them. Being an expert on such things Wayne is sent to sort out what it is going on. Eventually the sub purposefully cuts off their communication with the support ship above them and comes to rest nearby on the seafloor. They swim out to investigate and find a strange object which they bring back to study. It hatches into an alien amphibious monster and then things get crazy. 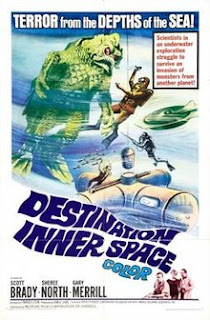 The creature is one of many that is onboard the sub, which is from outer space. They are an invasion force and need to be stopped before they begin rampaging across the ocean. It is up to Commander Wayne and the others to do battle and defeat them without any help from above. The creature has already killed the crew of the support ship and wrecked the radio equipment. Is the Earth saved? Well of course it is, this isn’t the kind of movie where everyone dies you see. I guess that might have been a spoiler. My bad.

This is a straightforward and simple monster movie plot that follows all of the tropes of the genre. Monster comes to Earth, people die, one of the heroes is flawed and has a history, a scientist wants to communicate and understand the monster. You know the stuff I’m talking about. While it doesn’t break any new ground, I found that Destination Inner Space follows the pattern without flaw and keeps the action moving along briskly. This one checked all the boxes and did so in a satisfying way that had me interested from start to finish.

The cast is mainly “B” level and for the most part are relative unknowns. The two biggest exceptions to this are Scott Brady, who plays Commander Wayne, and James Hong. Yeah, that James Hong! Brady was a well-known actor who is in a lot of drive-in flicks. Most of the time in a supporting role but here he does the action lead very well. It was nice to see him given a meaty role. Hong is barely in the movie and plays the station’s cook and comic relief. Nothing noteworthy just fun to see him.

The real star of the movie is the creature. It is a very cool looking latex job that gets a lot of screen time and really is the highlight of Destination Inner Space. Not only does it have that cheesy rubber suit appeal to it, but the thing looks and moves good both on set and in the underwater scenes. We get a lot of it swimming around in this flick. That shows me that they spent a great deal of time on the design, which is very surprising for what I believe was a lower budget independent movie. I was also impressed with the miniature work used to bring the station and the alien ship to the screen. This also shows an attention to detail and quality of work that I didn’t expect for an independent movie in the sixties.

How have I never seen this movie before? Hell, I’ve never even heard of it until recently! This is something that I would have expected to be in heavy rotation on various monster movie shows when I was growing up. I’m glad to have stumbled over the movie and can now sing its praises to anyone that will listen. If you like creature features you need to track down a copy of Destination Inner Space. I highly recommend it.

Posted by Gutmunchers Lives at 10:13 AM