Yeah, I know that I’m really late to this game. This franchise never appealed to me, so I avoided it. I always figured that this was just your modern “scary” movie with a bunch of telegraphed jump scares. That stuff does nothing for me. But after yet another friend recommended it to me, I relented and checked out this first movie. The fact that it popped up on Netflix for free also helped guide my decision. 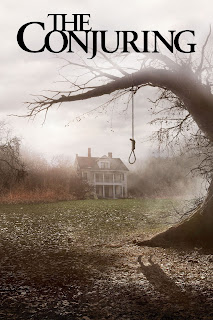 The story starts with an introduction to Ed and Loraine Warren, paranormal investigators. They are working with some roommates who thought they invited the ghost of a little girl to live with them in a doll called Annabelle. Ah I see where that is headed. Were they thinking sequels all the way back here? Anyway, they tell the ladies that this was a huge mistake and that the doll is being used by a Demon as a gateway to possess one of them. It doesn’t want the inanimate object you see but will use it to gain a foothold or advantage. They take the doll and lock it up in their basement, which I think is also the basis for a future movie.

Then we are introduced to a family moving into a new house. Some spooky stuff happens with a boarded-up basement, a game of hide and seek, and a young daughter who sleepwalks. There are all sorts of secrets about the house that eventually are revealed. Bottom line is there is the spirit of an evil woman who keeps trying to possess the mothers with the intent of making them kill their own children. Why? I think she was a Satanist and sacrificed her own baby to the Devil. It is up to Ed and Loraine to save the day with an exorcism!

Let me say something right up front. I know that the Warrens are very controversial characters and that this story is supposedly based on case files. They have true believers and skeptics who are both very passionate. Trust me after watching this movie I Googled them… holy crap! I’m not going to get into any of that shit. I watched The Conjuring for entertainment purposes and not to get into some discussion about the supernatural. Greedo isn’t real and yet I still can enjoy Star Wars. Though for the record Han shot first. With that out of the way lets talk about the movie.

I enjoyed the hell out of the Conjuring, pun not intended. The filmmakers do a wonderful job creating and maintaining a creepy vibe throughout the entire runtime. I seriously was on the edge of my seat wondering what was happening and where the next spooky thing was coming. I’m not talking about jump scares either, though there are a couple good ones. This movie leans heavily into atmosphere and making you uncomfortable. From the hide and go seek clapping gag, to hands that clearly aren’t her daughter, methane smells, suddenly seeing characters breath in the cold air, and of course that damn music box. There is some creepy stuff here to sink your teeth into. They even hit upon a terror that I think most of us had as kids… cover your damn feet with the covers! That got under my skin.

The movie is always interesting and with what I’ve mentioned above as well as a few other surprises that I didn’t there is always something onscreen to hold your attention. Though I do need to warn you that this is the sort of movie you need to pay attention to. Put your phone down and pay attention or you are going to miss something for sure.

The Conjuring is unrelentingly creepy and fun. I know that some of the sequels are mediocre, but I think that I still want to check them out. I know it spawned that doll movie as well as the nun movie. But before that I guess it will be the Conjuring 2. I highly recommend this one.

Posted by Gutmunchers Lives at 4:46 PM