Set in the distant future of 2020 mankind has used up all the resources on the surface of the planet and looks towards the ocean to sustain humanity. The movie takes place on one of those deep-sea habitats and has Priscilla Barnes (Three’s Company, The Devil’s Rejects) as a scientist testing some goo that they found on the bottom of the ocean. She turns the goo into foam and seems really excited about that. We also see Bradford Dillman as Cobler, the company man in charge of the habitat. He has called for a replacement team, which annoys Barnes’ character, Claire. The goo now foam is her discovery, and she wants to see it thru. 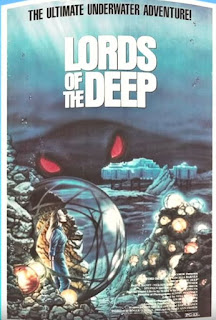 The goo turns into an undersea alien monster and people start to disappear, including the replacement crew. Cobler starts to lose his mind and eventually we find out that he has been killing the crew to protect the company’s plan to kill the aliens. You know because they are aliens and whatnot. Luckily, the alien goo monsters are cool and want to help the human race, so they rescue the surviving crew from an earthquake that destroys the facility. The end.

This is a pointless exercise that has nothing to say and feels long despite only being seventy-seven minutes. To make a movie like this you need a villain or at least some sort of conflict to make the story interesting. I suppose that Cobler is supposed to serve that purpose, but it is a complete misfire. First Dillman isn’t that intimidating and almost is whiney when he is killing people. The idea that it is the company who is manipulating the situation is a borrowed plot device so you would think that they could execute it better. In fact, most of this movie feels borrowed from much better science fiction flicks. You know it is bad when I spend the duration watching your movie being reminded of others that I’d rather be spending my time on.

Just to be clear I’m not criticizing the cast. They all do a fine job with what they are given. I just think that Dillman was miscast in the role. This isn’t helped by the complete lack of arc or interesting backstory to his character. He goes from leader to bad guy company man without any transition. Though the complete lack of menace from his character is I think on him.

The movie does excel with the special effects work. The creatures look decent and are brought to the screen with practical effects work. It is clearly on a low budget, but they do a fine job. There are also several miniatures used for the base and different subs. These have an old school vibe to them that I enjoyed and look good onscreen. This is the most frustrating part about Lords of the Deep, they nailed the hard stuff. Where a movie like this normally fails is the budget and lack of quality special effects work. That isn’t the case here, they just don’t have an interesting story to support the effects. That was a real bummer.

Clearly, I’m not going to recommend this one. It is a throwaway low budget science fiction movie that had very little effort put into creating a story. Instead, they just cut and pasted ideas from popular flicks and winged it. That might work sometimes, but not this time. Lords of the Deep is a hard pass from me.