Okay first things first. The title of the movie is one that has a naughty word in it. I don’t feel the need to censor myself but since you can either find this movie listed as it is written above or under the totally neutered title Stay out of the Attic, I figured I should refer to it as such. If that annoys you… well, I don’t fucking care. See what I did there? Anyways let’s get to the review. 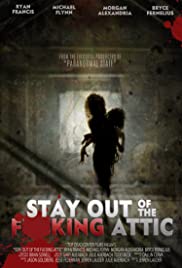 Some movers show up at a spooky old house to pack up the possessions of the current occupant, Mr. Mueller, before new owners are to take possession. He seems friendly enough but is a bit weird about the workers. The boss is white, but his employees are Black and Hispanic. This is important later on. While they are a bit creeped out and are unhappy with him asking them to finish by morning, he tosses enough extra cash at them that they agree and get to work. This leads to a packing montage with some spooky music playing.

While packing stuff up they find a bunch of Nazi books and letters referencing Dr. Mengele, who for the uninformed was the worst of the bunch when it came to experimenting on human beings in the concentration camps during World War II. They figure that he must be some nut job continuing the doctor’s experiments when they find a set of twins in the attic, they didn’t stay out, who have been mangled. Unfortunately for them the doctor has the house covered in security cameras and he locks it down before sending a mutant after them. This leads to some violence, revelations about one of the characters, and the big twist as to the identity of the bad guy. Oh and you can see how the race of the workers is an important plot point with Nazis being the bad guys.

I’m trying to keep things in my plot synopsis a big vague. I enjoyed this movie despite some flaws I’ll talk about later. The best part is the story which I thought I had figured out but was surprised as it was revealed. I will share the fact that this movie leans heavily into the Nazi portions of the plot. The doctor is continuing the horrific experiments of the Germans which gives us the sad girl in the attic as well as the crazy mutant running around. Now if you are uncomfortable with using real life horrors like the crimes committed during the Holocaust in a horror movie then this is not going to be the movie for you.

There are all sorts of references, including the second-floor bathroom being turned into a gas chamber for failed experiments. Like I said it gets rough. Normally I’m able to separate movies from real life and I like having Nazi’s as bad guys since there is a visceral joy to seeing them get the comeuppance in the movies that many avoided in real life. That includes the fate of Mengele who escaped to South America and lived his life well into the seventies before dying at the ripe old age of sixty seven. That said the fact that the girl hiding in the attic was named Anne might have been that step over the line and made me uncomfortable. Not in an artistic way, but in a God Damn it guys you have made your point and that was too far sort of way.

Judging it solely as a movie and ignoring the above I have to say that it is a decent flick. Clocking in at around eighty minutes it gets right to the good stuff tossing the characters in the creepy house. It spends about half an hour ramping things up before the doors get locked and the violence begins. While I didn’t see the identity and motives of the doctor coming, the narrative does follow a familiar pattern of trapping the victims and torturing them. The attacks are okay, and the creature effects work excellent. The look of the mutant as well as that of the girl and her unfortunate twin are well done. There is a great bit of gore with an eye getting removed and a head getting stomped in. But if you are looking for a gorefest this might not be the right movie. There is some good stuff here, but not a lot of it.

This is where I normally talk about the body count and I thought that this movie had a weak one with only three kills. But then thru a plot device and some end credits scene they undo all but one of the deaths. The one they leave in was for a character that we aren’t supposed to like. That was a bit of a bummer and annoyed me.

Stay out of the F**cking Attic is a decent movie that has some baggage that might turn some viewers off. Regardless I think that this is a serviceable horror flick and worth checking out. Just want to make sure that people know what they are getting into without spoiling things too much.