Before I start, I need to make sure that everyone knows that the movie I’m covering is Truth or Dare directed by Nick Simon. I know that there have been a lot of movies come out with this name, most of which I really dislike. So, I want to make sure we are all on the same page. Okay now we can get started. 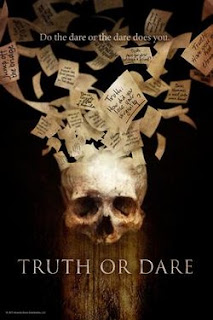 The movie kicks off in nineteen eighty-three with a couple scared kids, one of whom is on the roof of an old house. He falls to his death and she, we find out her name is Donna, sees a message telling her to pour acid over her head. She does this after preparing a concoction that I think is supposed to protect her. Some credits roll and we are moved to present day. There we meet another group of college kids who are having a Halloween party in the same house. Not only that the host explains the history and wants them to play Truth or Dare. Guess what happens?

So now they are stuck playing the game. If they don’t do the dare the dare will do them. Basically, the game and whatever is behind it will kill them or make it much worse. And they don’t get to do just one dare, no there are three rounds. Each one more deadly than the one before it. They think that they have it figured out and can work as a team, but it gets ugly… like chopping off body parts ugly.

I like this movie. Initially I thought it was going to be by the numbers “trapped in a house until morning” sort of story. But pretty early on they get out of the house. They even go to the hospital and call the cops, who think that it is all a terrible accident. Unfortunately for them the game follows them and keeps up the pressure. It manages to get one of them in a dorm room and forces another to rob a gas station with horrible consequences. I liked the fact that we got more than just the house as a setting. They even track down the only survivor from last time, Donna, to talk to her about the game. It was a nice twist to see Heather Langenkamp show up in the movie in the role. This is how you stick an icon in without making it feel like a stunt. He is hardly recognizable under the makeup; remember she did pour acid over her head. 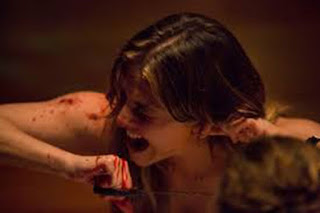 The kills are decent in this movie. Someone gets impaled, another is hung, there is a death by shotgun, some Russian Roulette, and even death by Cockroach swarm. But the death scenes are the highlights. This movie knows how to push some buttons my friends. One of the dares is pulling a couple of teeth, which they show on screen with relish. Rocking back and forth with a set of rusty pliers… damn it movie! But the best is the second to last dare. Cut off seven living body parts. Eyelash and hair are a couple easy choices. Then they get to ripping off a fingernail and shit gets gruesome. In case you were wondering earlobes, fingers, and toes are all also removed onscreen. Though the last, a foot, is sadly off screen.

This movie pushes a lot of buttons and made me queasy. Gore doesn’t get me but some of the stuff they made the characters do to themselves ramped things up to an eleven on the cringe factor. I don’t know if this is the kind of movie that works as well on a second viewing, but that first one is a blast. I highly recommend Truth or Dare.

Posted by Gutmunchers Lives at 7:00 PM