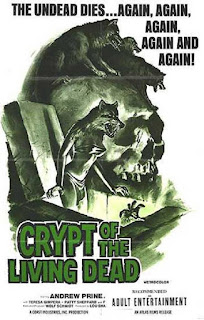 I hadn’t heard of this one before. It is a Spanish production of a vampire movie that stars Andrew Prine, so I figured that I’d give it a chance. Probably shouldn’t have…

Prine plays Chris, a man who comes to an isolated island to recover the body of his father who died while researching the local legends. Seems the old man had found an undiscovered tomb and was crushed underneath it. Chris uses his engineering abilities to rig a pully system to free the body. I think that this was part of an evil plan to have him release an ancient vampire because it takes a college education to remove a stone lid… Okay? There are some other people who primarily exist for the vampire lady to kill or to secretly be in league with her. Some stuff happens, Chris falls in love, the vampire is killed, and we get a “twist” ending that you can see coming a mile away.

This one is surprisingly bad. It starts off cool with some running around a tomb, a caveman looking fella, and it’s in black and white! Only it really isn’t because I guess the movie was shot in color and there are just some black and white copies floating around. I think that someone had seen Romero’s Night of the Living Dead and thought that it was a good idea. While I can respect the exploitation of the audience the execution was a little disappointing. I think that is why many of the nighttime shots are so dark. You have to light this stuff differently if it is meant to be color and that doesn’t translate well to black and white.

The other big issue with Crypt of the Living Dead has to be the pacing. We get some action in the beginning and then a ton of pointless exposition about kings and queens and armies being trapped and turned into vampires. There is also the plot with Prine’s character Chris falling in love. There is also the caveman, to be fair I think he is just supposed to be a man living in the wild, running around trying to kidnap Chris’s love interest. This gives us several sequences of Chris chasing him around in the dark. As I’ve already mentioned because of the switch in formats these night scenes are difficult to see and make out what is happening. The pointless plot and lighting make Crypt of the Living Dead an excellent cure for insomnia.

I’m always in the market for a new cheesy drive-in movie and the Spanish have provided a lot of those for me. I had hopes that clearly didn’t come to fruition with Crypt of the Living Dead. I’d recommend skipping this one, but if you insist I’m fairly certain you can find it for free since it pops up occasionally on YouTube now and then. If you manage to find a copy in color, please send me an email using the contact form here on the blog. I’d be interested if that makes a big difference or not.

Posted by Gutmunchers Lives at 5:12 PM