The Anomaly by Michael Rutger

This is a newer book that I discovered on accident because a pair of my favorite authors, Preston and Child, had a blurb on the cover. Most of the time I put very little faith in such things since many popular authors are bullied or cajoled into doing this. But the plot synopsis sounded interesting, so I gave it a shot.

Nolan Moore is a YouTube “star” and host of his own show named the Anomaly Files that looks into the mysteries of the universe. He is on the verge of moving to a real network with the aid of a mysterious benefactor, the Palinhem Foundation, and their representative a crazy hippie chick named Feather. Yes, her name is actually Feather! Along with his producer and crew they head out into the Grand Canyon looking for a missing archaeological site that might prove the existence of a lost civilization. They do find the caves they are looking for and a whole lot more in the bargain. By the end of the trip some people are dead and some mysteries are solved. Though the answers create a lot more questions. 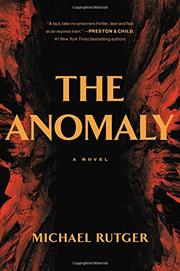 I sort of liked this book. The opening is brisk as we are introduced to the characters quickly and dumped right into the action. I also thought that the last couple chapters of the book were well done and build an interesting world where we could see more adventures of Nolan Moore. It is pretty obvious that Rutger is hoping that this becomes a series and sets The Anomaly up for sequels. If that happens I hope that there is a little more meat on the bones of future books. Our characters get trapped in a cave and we get page after page of how they have little water and food. It is also clear that they are disorientated by the dark. While I’m sure all of these things are true it doesn’t make for a great read.

I won’t say I was bored, but the book does get to be a grind before picking up towards the finale. Part of the issue is the monster or lack thereof. While things are hinted at we don’t get anything to sink our teeth into. Mostly they are generic threats that don’t really feel that dangerous. In fact the people and their poor decisions are more destructive to each other than any of the “creatures” in the story. I also found what was supposed to be the big finale and “shocking” twist to be boring. Especially since Rutger goes for the trope of the “Dead but not really Dead” character showing up to save the day.

To be certain I’ve read far worse books. And to be honest I liked this well enough that given a chance I would check out a sequel just to see if the author has progressed in his storytelling. Rutger has potential to be very good, but unlike Preston and Child’s first book The Relic he didn’t come out of the gate strong. If you can find this one cheap or get it from your local public library give it a chance. But I wouldn’t be in a big hurry to run out and buy a full priced copy.