The Witch of Sixkill by R. Karl Largent

Recently I read Black Death by R. Karl Largent and because I enjoyed that book so much I picked up this one when I saw it sitting on the shelf of my local used book store. While Black Death was more in the Eco Terror genre this one has a much more supernatural feel to it. This is clear from the title and the brief synopsis on the back cover. Does it work as well in its genre as Black Death did? Time to find out.

Charlie Frazier is an unhappy man. He is stationed on an isolated airbase in Newfoundland near the Arctic. Things haven’t gone well for him at all. His wife left him, his new girlfriend was cheating on him, his commanding officer derailed his military career, and his brother stole his inheritance. Pretty much everything sucks. When he hears of a witch that will help him get some revenge he decides that sounds like a great idea.

The book opens up with him driving thru a snowstorm to meet her. After some “negotiations” she agrees to help him and sends him on his way with four glass jars. One for each person that wronged him. He is given specific instructions on what to do with them and when to do it. The remainder of the book is the events that happen to each person when they receive and open the jars. I don’t think it would be considered spoilers to say that things don’t end well for them. Does Charlie get his revenge? Yes, he does. Are there consequences? You could say that. 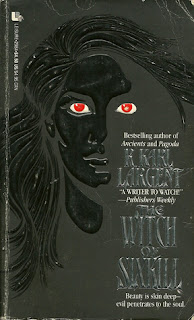 This is a much different book both in subject matter and in construction, but I like it just as much as Black Death. The supernatural themes of the book are entertaining and come with their own logic. I like rules and the fact that the author makes sure that the magic/supernatural revenge is consistent and makes sense is awesome. There is also a theme to the individual curses that the witch sends to each of the victims. One literally rips out their heart while another age the victim destroying their vanity. We also get a favored son spending some quality time with dear old Dad. As an added bonus the witch has to convince Charlie to return after the deeds are done to pay for her services. This leads to some more fun and death!

Much of the book is straightforward, but in the case of Charlie’s ex-wife there is a cool twist that I didn’t expect, but that was clever. I don’t want to give anything away so keeping it vague it appears that Ruthie (his wife) was an unpleasant woman that made enemies easily. There are a couple other fun tweaks to the plot that made this an interesting read. Just when I thought I could anticipate what was coming next Largent twists it up a bit while still delivering the goods. Much of my life has been spent with my nose in a horror themed book so I’m not often surprised. When I am it is much appreciated.

This is an even better read than the first of Largent’s books that I read. I recommended that one and will also suggest that this is something that fans of supernatural horror fiction pick up for their libraries.

Posted by Gutmunchers Lives at 10:38 AM