More book review fun for the Horror Dude Blog. This time I dug into an interesting creature feature called Saurian. It promises an epic story about modern day dinosaurs rising from the depths. I guess that is sort of what happens. They aren’t really dinosaurs but aliens that were stranded on the planet millions of years ago and shapeshifted to look like the locals. Not spoilers since you know this from the first couple of pages on.

Our main character is named Tom and we first meet him as a child. He lives on the wrong side of the tracks in a rundown Florida town. One night after a traumatic incident with a stranger chasing him thru the woods he is at home sleeping when his world changes. Something large and evil attacks his neighborhood destroying all of the homes and consuming everyone but him. That includes his father who he sees taken right before his eyes. Now an orphan he is taken in by his aunt and spends years forgetting what happened.

Later we see that the grown-up Tom is a successful businessman in Miami, but the memories of his childhood still haunt him. He starts to poke into the past and more of them surface, things he had tried to bury. Suddenly he finds himself in the middle of a nightmare involving a large dinosaur like creature, aliens, and shapeshifters. The only thing to do is kill the monster, but how? Lucky for Tom he has made some mysterious allies that might be able to help. Unfortunately, there is also a very human element to the creature that is tracking him as well. It is intelligent and knows that Tom is planning to destroy it. Which is more dangerous the beast or the cunning human? 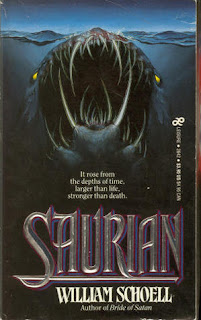 This book is okay, not great, but decent. I liked the idea of the alien shapeshifters being responsible for many of the cryptid sightings around the world. Most of them have rules about their behavior, except of course for the one in the book. It was disappointing that most of the plot focuses on Tom and some of the less interesting characters rather than the cool science fiction story they were hinting at. For example, we get “thrilling” plotlines like how Tom’s father was an alcoholic and his confliction as he ends up falling for Samantha who is also an alcoholic. There is a lot more about their feelings for each other and the baggage that booze brings with into it than I care about. I wanted more damn monster action!

I also get the feeling that Schoell didn’t have a good ending in mind for the book. We get this buildup for three hundred fifty plus pages that Tom is driven to get revenge on the man/creature that destroyed his family. This thing keeps chasing him and trying to kill him. Be warned this is a bit of a spoiler but he watches it kill Samantha right in front of him! Does he get his payback? Nope he goes to the hospital while a minor character that was hardly in the book at all does the deed. For all the things that I liked about the book it is topped off with a wholly disappointing ending. That sucked.

There were some fun bits in Saurian and I’m glad that I read it. But this isn’t a story that is going to grab you and make you finish it. The best books cause me to lose sleep as I say to myself, “Just one more chapter before bed…”. This isn’t one of those. If you are looking for a good monster story maybe pass on this one.

Posted by Gutmunchers Lives at 11:35 AM